Home Competitions Win a copy of ‘The Double’ – Chelsea FC End of Season... 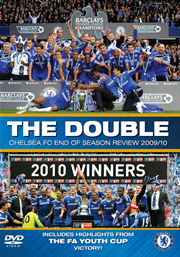 IT was the season that saw Chelsea FC make history!
Led by the masterful Carlo Ancelotti Chelsea FC broke record after record as the club secured a scintillating Premier League and FA Cup Double for the first time in its glorious history.
The Blues were simply untouchable as they sealed a memorable title triumph on the last day of the season with an 8-0 thumping of Wigan, taking their tally for the year to 103 goals – a new Premier League milestone.
The season was filled with many magical memories including home and away victories over traditionally the other big three – Manchester United, Arsenal and Liverpool.
The FA Cup Final proved the perfect finish to an epic campaign as another Didier Drogba goal sealed a deserved victory against a stubborn Portsmouth.
Here’s your chance to re-live all the drama in our fantastic prize giveaway. Two lucky readers can get their hands on a copy of THE DOUBLE – Chelsea FC End of Season Review 2009/10 DVD
Packed full of interviews and goals, this is a must for any Chelsea fan!
To be in with a chance of winning, just answer the following question:
Chelsea play their football at which ground?
Is it? A) Craven Cottage, B) Emirates Stadium, C) Stamford Bridge.
E-mail your answer along with your name and address to competitions@theasiantoday.com before 27th June 2010.
Winners will be chosen at random and their names posted here after the closing date.
The Double: Chelsea FC End Of Season Review 2009/10(cert. E) will be released on DVD (£19.99) by Spirit Entertainment on 7th June 2010