Home Competitions Win a copy of Triads, Yardies and Onion Bhajees on DVD 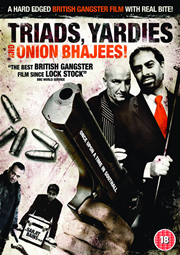 IT was the film they tried to ban. Triads, Yardies and Onion Bhajees is the British Asian gangster film that was hit with widespread criticism in 2004.
But just weeks before it was due for its national release Southall Police and Piara Khabra – the then Labour MP for Ealing & Southall – hit out at the films director Sarjit Bains, accusing him of glorifying gang violence.
Following widespread criticism the film, which tells the story of the Southall-based Holy Smokes gang and a £6m robbery at Heathrow Airport, was sensationally denied a mainstream theatrical release.
Now six years on the film is finally available on DVD – and we have three copies to giveaway.
To be in with a chance of winning, just answer the following question:

Is it:
A)    Gurinder Chadha
B)    Sarjit Bains
C)    Karan Johar
If you think you know the answer, e-mail your full name, address and of course the answer to competitions@theasiantoday.com before 13th June 2010.
Names of the winners will be posted on www.theasiantoday.com after the closing date