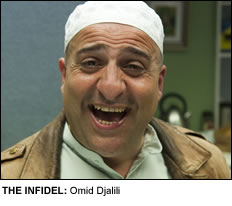 Omid Djalili- yes, that bloke out of the moneysupermarket.com TV adverts – returns to the BIG screen this month in the hilarious comedy ‘The Infidel’.
He plays Mahmud Nasir loving husband, doting father and something of a “relaxed” Muslim. But his life is turned upside down when his mother dies and he comes across his birth certificate – Mahmud Nasir isn’t a Muslim, he’s Jewish!
Directed by fellow funny man David Baddiel, the film hits the UK on April 9th.
Desixpress entertainment honcho Jett Mall caught up with Omid…
Why should people go and watch the infidel?
It’s a movie that breaks down certain barriers; we’ve never really had a British Muslim family presented in the cinema like this. What happens in the film is an event that happens in a person’s life, which ultimately leads to his redemption and to him becoming more confident to the important things in life. It’s a very subtle film and I play an every man character – kinda like a Homer Simpson that goes through an amazing struggle. You wouldn’t think that somebody finding out that they’re Jewish would have such an impact on someone but here it does. It’s definitely a journey well worth witnessing!
How did the opportunity for this movie in particular come about?
I know David’s partner who always said to me that she’d like for me to meet David. He came to one of my shows and a week later he called and told me how much he enjoyed the show. He told me that he had an idea for a film and pitched in it a very simple form. When I first read the draft, I thought it was the best draft of a movie I’d ever read. I was very pleased that somebody of his calibre would think of taking me on board.
From one funny guy to another – David Baddiel. What was it like working with him?
I was very pleased to collaborate with somebody of the quality of David Baddiel – He’s one of comedies great thinkers, and he’s somebody who has been around for a long time. Life is very short and you want to work with people who you enjoy and you will learn from. It was a real joy, to work with someone who you’ve always wanted to spend time with.
Are you in any way nervous at the reaction that the film will get?
Nervous because where the words Islam and comedy are together it’s going to provoke an instant reaction even when people know nothing about it. I’ve never been interested in making fun of any religion and that’s not what we do in the film. Many Muslims who have seen the film haven’t been offended; I think I’m concerned about certain people who will draw conclusions without seeing the film. Having said that it’s to be expected and something I went into the project full knowing. 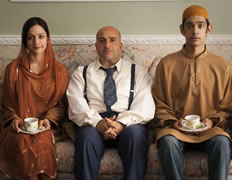 Was there anything challenging about the film?
In any film you do there’s a massive collaboration of people who have different ideas. The challenge is when you get into a room and you’re creatively pulling each other in different ways. That’s a very exciting challenge and the fact that we all came from different faiths and different shades of atheism made it nothing less than a very stimulating process!
You’re a funny man – was it easier playing this role over the others, being a comedian?
What we’ve done is we’ve tried to keep it very real. I think it’s not trying to be desperately funny, it’s one of those movies where funny comes from the situation. I just try to play the role as straight as possible, and if laughs come from the truth of the situation that’s fine. It’s a film that’s got a few one liners, which I don’t think takes it away from the reality of the movie it keeps a naturalism in keeping with the Woody Allen films of the 1970s.
Being the star of the film, what impression would you like a viewer to go away with of yourself?
I think that, the choice of me in a starring role is important. If you look at me; I’m an anti-star because every thing a film star has to be is to be tall, good-looking, speak well and my character flies in the face of everything we see to be a star. I hope people come away and feel as though they’ve had a real experience and don’t see it as just Hollywood. It’s a very real, crafty slice of life. I hope that it does well because it’s reality and not because it’s starry or brass over anything. I like the fact my character is fat and hairy, it’s important for people to see that it’s a normal character and somebody they can relate to.
Do you think this film has any good for society?
Yes it does, of all the messages it has in the film it asks is religion fundamentally one, is religion there to help us grow as humans – yes it is. Very much a movie of the soul, I think it brings up very subtle messages of what religion is about, it doesn’t answer the big questions but it makes you think.
Being a comedian, can you tell us something funny… a joke?
Errrm… I’m trying to think… this is the only time that my mind has shut off. What we’ve learnt is that if you ask a comedian to tell you something funny they’re minds shut off… that’s the big joke! You’ve left me speechless!
The Infidel releases nationwide on April 9