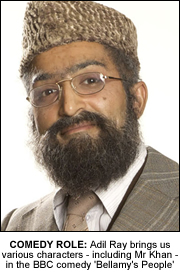 HERE’S BBC Asian Network presenter Adil Ray – as you’ve never seen him before.
The pictures are taken from the new BBC Two comedy series ‘Bellamy’s People’ which sees Adil appear as a number of characters – Mr Khan, a hilarious self-appointed Asian community leader from Leicester, MC Raa, a DJ based in Birmingham who gives us his take on Muslim beats and Guru Dev Gattacharjiya, who enlightens us with his great wisdom about everything.
The eight-part series, which reunites comedy duo Paul Whitehouse and Charlie Higson for their first television partnership in ten years, kicked off at the end of last month and it’s a hoot!
We caught up with Adil for a brief chat about his new adventure…
Adil you’re on our screens in ‘Bellamy’s People’. How did you get involved in the series?
Well I have been working on comedy stuff for my radio shows for the past 7 years. Some time ago I had a meeting with a few people at the beeb and expressed an interest in trying to do comedy on TV. They laughed in my face! That I thought was a good start. Luckily for me neither Paul or Charlie do good Asian accents or look Asian. Paul did try. He sounded more Welsh Indian – a bit Gavin and Satvinder!
There are some great publicity shots of you as ‘Mr Khan’ and ‘MC Raa’ – completely unrecognisable! Did you enjoy dressing up for the part?
My friends will know I have a great fondness for dressing up. In fact, it’s quite common knowledge to not leave any shalwars airing in the bathroom. Sundays in particular are a day I enjoy relaxing with a nice country stroll. They call me Adila. I haven’t quite got the hand of untying the nara though!
Tell us a bit more about the characters?
Mr Khan is a self appointed Muslim Community Leader from Leicester.
He is very busy representing but doing very little. He adores Britain and admires the Royal Family because just like his family, they marry from within and live in one big house together.
MC Raa is a wannabe Pakistani rapper from Birmingham. He is confused about his identity as he has a strange love for Jamaica. Although often angry, he’s completely harmless but don’t tell him that. Oh and do not ask about his Mum. Guru Dev Gattacharjiya is a religious man. But also a businessman. He’ll enlighten you. At a cost! 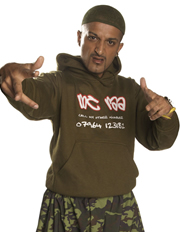 How much input did you have in creating these characters?
Mr Khan and MC Raa have come directly from the radio show so I created them. Have to say though; it was the listener’s support that refined them into what they are today. The Guru was devised by Paul and myself.
You’ve admitted to being a huge fan of Charlie Higson and Paul Whitehouse. Does it make it more difficult in some ways, being a fan of the duo, to come in and act in one of their shows?
It makes it exciting. I think whatever we do in life is worthless unless we’re learning. To pick up pointers from these guys is just the greatest opportunity. I have decided that if I stick with them long enough they may become my best friends.
They’ll share their secrets of comedy with me. Paul may leave me his Ford Capri and Baftas in his will and his joke book – the one he nicked from Bob Monkhouse.
You’ve had a few stints on television before, is this something you’re eager to pursue more?
I would love to. If DM Digital are reading. Come and get me!
What’s next for you Adil? What have you got lined up for 2010?
Who knows really. The Adil Ray Show breakfast show on the BBC Asian Network is my main priority right now. Its tremendously important for me that we firmly establish ourselves as the leading BritAsian radio show in the country. I don’t see much point otherwise. I think we’re getting there. We’ve managed to wipe out one or two stations and some bloke called Wogan. Next week we’ll be asking “why do desis have plastic on their remotes”. Original eh? That should do it.
Bellamy’s People, Thurs until 11 March, BBC Two, 10pm
The Adil Ray Show, BBC Asian Network, weekdays, 7am – 10am