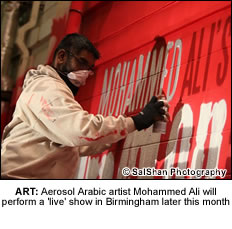 RENOWNED Graffiti artist Mohammed Ali will join forces with leading international poets in front of a live audience for a special one-off show in Birmingham later this month.
The ‘Writing on the Wall’ event will take place at the city’s Rep Theatre on 21 January.
Having established himself in the arts scene for the past decade, Mohammed Ali’s latest project sees a four-year venture coming to life.
With the guidance of legendary Hip Hop theatre producer Jonzi D, Ali will accompany three internationally renowned poets on stage for a radical live art show.

The line-up for the event includes Zena Edwards, who has been performing as a professional poet for the last nine years.
She will be joined by American poet Amir Sulaiman who has twice featured on HBO’s Def Poetry programme, and Dreadlock Alien, who was Birmingham’s Poet Laureate in 2006.
In the lead up to the event Mohammed will also be working with local visual artists to create unique images in the theatre space, before embarking on the one-night-only performance on 21 January.

Mohammed returns to his hometown following numerous commissions around the world, including New York, Sydney and Kuala Lumpur.
He has also gained worldwide media recognition from CNN, BBC Newsnight, Aljazeera and Reuters, and received an award from the hugely respected ITV Southbank Show.

Mohammed said, “I have been fortunate enough to create art in major cities across the globe, but here in the UK we have our own issues, ranging from the economic crisis to the problems that face multi-cultural societies.

“I’m hoping to create art that will inspire people with hope and positive change by bringing a bit of colour into some of the ugly conditions that exist in the world today, using the arts as the new language for change. People should not underestimate the power of the arts in bringing people together.”


Writing on the Wall is taking place at Birmingham Repertory Theatre on 21 January. To book tickets contact The REP box office on 0121 236 4455 or visit www.birmingham-rep.co.uk