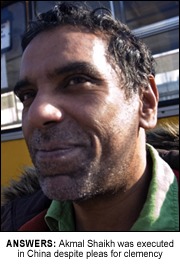 THE family of executed Briton Akmal Shaikh have written to the British government urging them to order an immediate inquest into his death in China.
The 53-year-old was executed by lethal injection on 29 December, despite claims he was mentally ill and suffering from bipolar disorder.
His family, human rights campaigners and the UK Government repeatedly urged China to reconsider their decision in the weeks leading up to Akmal’s death.
The father-of-three was sentenced to death in 2007 after he was caught entering the country with 4kg of heroin.
His supporters claimed he was duped into carrying the bag by a man who promised him music stardom in China.
Akmal’s family say the government has the power to order an inquest.
In a letter sent to Foreign Secretary David Miliband, Akmal’s brother, Akbar Shaikh said his family were desperate for answers.
“My family is suffering incredible grief and torment over the many unanswered questions surrounding Akmal’s death,” he wrote.
“We have begged the Chinese for answers but none have been forthcoming. All this uncertainty is just too much for the family to bear. We therefore implore you to direct a coroner’s inquest so that some of our questions can be answered, and the terrible mysteries surrounding my brother’s apparent death, 7000 miles from his family and all alone, can be resolved for us.”
Clive Stafford Smith, director of human rights charity Reprieve, said Akmal’s family had not been told of his death “until he was already apparently buried in the frozen soil of Urumqi”.
“Nobody told the family how or where he would be killed. No family member or independent observer was allowed to witness his death, view his body or verify his burial. We have only the word of a Chinese press release that he was even killed,” he said.
He added an inquest would give Akmal’s “grieving family” a “crucial insight” into his “final hours, his mental state and the extent to which he suffered before he died.”