Azad Ahmed and Imran Pervez jailed for total of 15 years 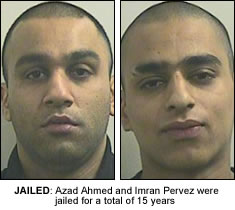 TWO Birmingham drug dealers have been jailed today for their part in a shooting in the city a year ago.
Azad Ahmed, 27, of Southam Road, Hall Green and Imran Pervez, 19, of Beaconsfield Road, Balsall Heath were sentenced at Birmingham Crown Court following guilty pleas.
They were jailed for their part in the shooting of a 25-year-old man in Hertford Street, Balsall Heath on 27 December last year.
The victim, who sustained thigh injuries, has since made a full recovery.
Ahmed pleaded guilty to charges of wounding with intent to cause grievous bodily harm and possession of a firearm and was jailed for 10 years.
Pervez pleaded guilty to possession of a firearm and was imprisoned for five years.
DC Craig Hall of the CID Serious Crime Team said the convictions sent our strong messages to anyone who risked carrying and using a firearm.
“Today’s sentencing should send a strong and clear message to anyone who thinks it is appropriate to carry and use a weapon. Quite simply, offenders will be traced and face lengthy terms in jail,” he said.
“These two dangerous individuals, who dealt drugs, are now off the streets and we would reassure our communities that firearms incidents of this nature are relatively uncommon.”