Home Interviews “London Dreams is a film with a heart!” 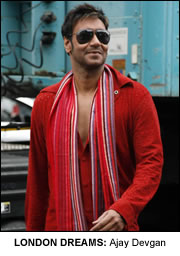 AJAY Devgan returns to the big screen this month in the keenly anticipated film London Dreams opposite Salman Khan and relative newcomer Asin.
He spoke with The Asian Today about teaming up with Salman after a ten year absence, about director Vipul Shah and how he got into the rockstar groove…
How did London Dreams happen for you?
This film was planned years ago; things didn’t work out at that point. Raj Kumar Santoshi wanted to make it initially but that took time to take off. Eventually the script came to Vipul (Shah) to direct. He reworked it approached me. I absolutely loved the script and decided almost immediately to do the project.
How was the experience of working with Vipul Shah for the first time?
Great!  Vipul is very clear about what he wanted and had planned everything well, which explains why he has been able to shoot such an elaborate film, with the right nuances, emotions, drama and romance. Vipul understands drama and on the sets he comes completely prepared with shot breakdowns. That makes an actor’s job really easy, as no time is spent in deciding how to can a particular shot. You just have to come on the sets prepared with your scene and he takes charge.
Tell us about your character in London Dreams
My character is very ambitious; one who had nurtured a dream of performing at Wembley Stadium since childhood and has worked hard towards fulfilling his dream. He’s the sort who values his ambition above love or friendship. He is emotional, he loves the people around him but his love for his dream overpowers it all. His actions may seem negative and aggressive but he is completely clear and justified in his head. It is a character I haven’t played before and really enjoyed.
Salman and you have reunited after ten years on the big screen. What was the experience like?
I think every actor grows with time. Salman has really matured as a performer and is fun to be with. He puts everyone at ease. We got along really well. Our off-screen chemistry shows on-screen as well! (Smiles)
Your character in London Dreams seems to have slightly negative shades. Any apprehensions?
When you watch the film, you will realise that he’s not exactly negative. He is doing something which he has to do, something he regrets later. It’s a story of two friends and their misunderstandings- a misunderstanding they did not want to create but happens. It’s about two friends falling apart and coming back together.
How did you acquire the body language of a rock star, which is the character you play on screen in this film?
I don’t play an over the top, Mick Jagger sort of rock star! The character wasn’t flamboyant, he was subdued and controlled so it wasn’t difficult to portray. I just had to listen to the music, imbibe it and behave how any musician would if he loved his music as much.
Tell us about your experience of working with a newcomer like Asin who stormed the scene with Ghajini?
She proved herself in Ghajini. I think she has done very well and is an extremely dedicated and professional girl. She is punctual and cordial with everyone on the sets. And as an actress I think she has a lot of potential.
Tell us about your look in London Dreams?
Vipul and I came up with the look you see in the promos. With did a lot of photo shoots, tried various styles – but eventually decided to not go completely over the top, as that would compromise the believability of this character. So this look is actually quite simple yet stylish and it worked. I wear earrings and have a different hairdo! I liked it! Hope everyone likes it too!
What do you think about the music of the film?
I love it and everyone I know has loved it too. My favorite track is Khwaab.
What is the USP of the film?
I don’t ever know how to answer this question. A film is about so many things, there are so many elements that go into making a final product, that it’s difficult to say which ONE thing makes it special. If the film works in totality it works. This film is about relationships, about friends and about oneself. It’s about a journey of two characters that are close to each other and how their differing attitudes towards success result in problems. It’s a film with a heart. It will pull at your heart strings, it will make you think about those who are close to you and matter to you.
Can you give a message to your international audience?
London Dreams is releasing on the 29th of October, I hope you all watch the film with your families and enjoy it.
Related Articles:
Picture Gallery – London Dreams: Pictures from the Vipul Shah blockbuster