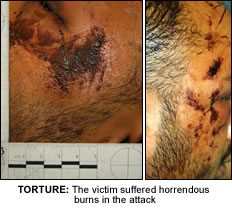 A LEICESTER man who was kidnapped and then tortured by a group of thugs for five hours has spoken out about the terrifying attack.
The 20-year-old, who does not want to be named, was left with broken ribs, broken cheek bones and severe burns following the attack last October.
Earlier this month seven of his attackers – some of whom the victim knew – were jailed for their part in the vicious assault.
Speaking for the first time about the attack, the victim admitted his association with low level drug dealing was part of the reason why he was assaulted.
Talking openly about the attack, the 20-year-old said he was eager to share his experience to help prevent other people from falling victim to this type of violent crime.
Having now left Leicester, the victim has started a new life, with a proper job and real friends.
“I’ve left my old life behind totally. I wouldn’t even steal a penny sweet from a store now,” he said.
“If you’re beaten that hard, so hard that you’re considering whether or not you’re going to die, your life will change. You’ll look at yourself and you’ll say, hold on a minute, why am I actually doing this? This is not worth it. Nothing is ever worth putting – not just yourself but your whole family – at risk. The risk, the shame, hurting so many different people.”
The victim was kidnapped by the gang who believed he had taken part in an assault on three of the defendants – Paul Bradley, Anthony Diglin and Stefan Downing – the previous day.
He was blindfolded and driven to a flat in the city where he was subjected to a five-hour ordeal which left him with two broken cheek bones, a broken nose and broken ribs.
He also sustained serious burns all over his body after a hairdryer was pushed up against his skin.
After letting him go, the gang tried to cover their tracks by removing the carpets and furniture to destroy possible forensic evidence.
Recovering in hospital, the victim revealed the sight of his crying mother at his bedside made his realise he wanted a better life.
“Drug money, it’s quick money it’s fast money but you’ve got to start thinking about who you’re actually affecting when you’re selling these drugs,” he said.
“Most of the people who are involved in the lifestyle I was involved in back then, they don’t even know there’s another life out there. Selling drugs, gun crime, knife crime – whatever it is – they’re so sunk into that lifestyle. But now that I’m in a new environment I’ve opened my eyes to whole new world. It’s so much easier. I don’t have to look behind my shoulder anyone.
“My parents have been the most supportive parents a guy could ever ask for. “Automatically it made me think, okay, what have I been putting my parents through? “They came to the hospital and mum just looked at me and turned around and started crying. She couldn’t even look at me any more and it just broke me to bits knowing that I’d inflicted on my mum so much pain.
“I so want to put this message out there because talking about what happened to me could prevent this happening to someone else. I’m willing to take that risk.” 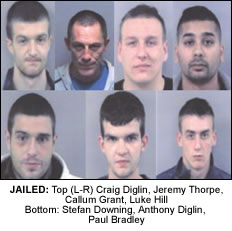 Paul Sean Bradley, 20, pleaded guilty to Section 18 GBH and False Imprisonment and was given an indeterminate sentence for public protection and put on life licence for what the judge described as his ‘major part’ in the assault.
Jeremy Kenneth Thorpe, 39, pleaded guilty to the same offence and received six years and eight months.
The remaining five men pleaded to Section 47 ABH.  Luke Hill, 30 was jailed for two years, while 25-year-old Anthony Diglin received 18 months.
Stefan Downing, 24, was given 30 weeks imprisonment suspended for two years, Callum Grant, 23, received 30 weeks suspended for two years, and Craig Michael Diglin, 24, was given a two-year supervision order.
Speaking about the investigation, Detective Sergeant Kenny Henry said: “The defendants tried very hard to outsmart us; they thought they were covering their tracks, but we were prepared to work long and hard to bring them to justice for what they did to the victim.”