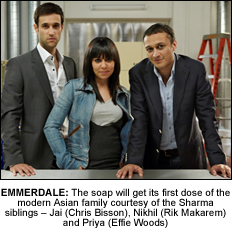 ACTOR Chris Bisson will find himself back on primetime television tonight when the new Sharma family stroll into Emmerdale.
The soap will finally get its first dose of the modern Asian family courtesy of the Sharma siblings – Jai (Chris Bisson), Nikhil (Rik Makarem) and Priya (Effie Woods).
With an already impressive CV – East is East, Coronation Street, Shameless – Chris Bisson knows all about the pressures and career perks that come with starring in one of Britain’s best-loved soaps.
We caught up with the actor to get the lowdown on Emmerdale’s new mysterious trio…
How would you describe your character Jai?
Jai is a successful businessman, but he’s also very laid-back and easy-going, which is a counterpoint to his brother Nikhil, who’s uptight and straight at times. Jai is a fun-loving character – he has a bit of an eye for the ladies. I think he takes a liking to Leyla when he first arrives in the village, she quickly tells him she has a boyfriend. He’s also going to ask out Faye, which will be interesting, and then Nicola much to the annoyance of Jimmy! Jai manages to talk his way around it and offers Jimmy the haulage contract for the factory. He always thinks of a way round something, if he ends up in trouble, he’ll always come out smelling of roses.
What attracted you to the role?
Jai is an interesting character to play and he has a lot of interaction with the other characters. He’s quite light and quick-witted, and lets the other characters do the hard work. So he’s fun in that way, but he’s also very confident and self-assured. He’s a nice person to have around so he fits in well.
What appealed to you about joining Emmerdale?
Emmerdale goes from strength-to-strength year-by-year and it’s a very exciting time at the moment. There’s a great cast, a strong set of characters and a great production team that are delivering fantastic scripts, so its always a pleasure to pick up your stack of scripts and get stuck into them in the morning.
How did your role in Emmerdale come about?
I was approached by Gavin, the Series Producer, who I’d worked with before and he asked me if I was interested in coming back into the soap world and joining Emmerdale. I was delighted to have been asked and was very excited about the possibility. He talked to me about the character and we had a long discussion about the right way of approaching the new family and it went from there. We did some screen tests to find Jai’s brother and sister and we were overwhelmed with talent! Rik and Effie really stood out and I think we’re a great combination.
What brings Jai and his family to the village?
The Sharma family have run a confectionary business for many years, and we’ve moved to our new factory premises in Emmerdale. In the past, Jai split from the family business and set up a chain of mobile phone shops, he’s a bit of an entrepreneur and knows how to get the best out of people, so he made a lot of money. His younger brother, Nikhil, thinks he’s the heir to the family business because Jai had gone off and done his own thing and their parents aren’t on the scene. Priya also had a business that went bust. Nikhil wants all the responsibility but Jai has a lot of experience so he’s there to help Nikhil, at his father’s request. 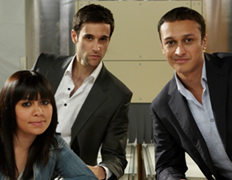 What is his relationship like with his siblings, Priya and Nikhil?
They’re a great family unit, because they argue like any family and they’re finding a new independent life away from their parents. Jai is the relaxed one, Nikhil is very straight and takes everything very seriously, perhaps a little too seriously. Priya is the absolute opposite of Nikhil, she doesn’t want any responsibility, she just wants to go out clubbing, have fun and work on the production line – she doesn’t want to be manager. Jai has a real affection for his little sister and he lets her get away with murder. He encourages her to go out and really looks after her, whereas Nikhil hates the fact that she can freeload. The brothers are both very sharp in terms of business but they’re complete opposites in the way they go about things. They are very good friends but their personalities are very different.
Do you think the Sharmas will adapt to village life easily?
I think they will settle into the village quite well. Jai will relax into it straight away. Priya will probably find it harder to adjust because she’s not used to being in such a small village where everyone knows your business. I think Nikhil will struggle a little bit with that too. A small village like Emmerdale can be quite a hard place to move to, everyone knows a lot about you, so it can take a bit of adjustment. They seem to be making friends and enemies though, so they should integrate fairly well.
Jai recruits some of the villagers to the factory, what does he make of the locals?
Jai is quite open-minded when it comes to the villagers, he doesn’t want to make any enemies to start with and he’s clever enough to know how to get the best out of his workforce and to form relationships with the locals. He has some concerns, he knows Eli Dingle is going to be stealing sweets, but he’s not too worried about that really. He’d rather he came into work and stole sweets than not show up at all! There is a change in the way the locals view the Sharmas once they realise they own the factory because they all want the work.
What can we expect to see from the Sharmas?
The Sharmas live next door to the Dingles, so there are a lot of opportunities for interesting and funny storylines there. Jai hasn’t conflicted with Cain yet and I think that would be interesting, because he’s the village baddie, but Jai is much cleverer in the way he operates. They could either be completely at loggerheads or they could see the value in each other, which would be interesting.
Have you have you found your first few weeks of filming?
It’s been great! We’ve been eased into it and had quite a gentle start, but we’re starting to pick up the pace. The great thing about the way we’ve been introduced is that it’s going to give the viewers the chance to get used to us before we start making waves.
What is it like coming back to a soap? Was it a shock getting used to it again?
It wasn’t a shock really, because I know from working on Coronation Street how demanding the schedules are and a lot of television dramas are very demanding too. So I knew to expect having ten scenes to learn, and having your head buried in your scripts. You do get used to it after a while and once you settle in to the character, the scenes become a lot easier to play. The director knows what to expect both from the actor and the character. I’ve worked with a lot of the directors and the crew from previous jobs so it’s been really nice and it makes it less daunting.
Do you still get recognised from your role in Shameless?
Yes I do, I finished filming in December so I still get recognised from that, it’s a real cult show and I was a stand out character in that for a lot of different reasons. I still get recognised from Coronation Street and East is East which is nice. It’s good to have worked on a huge variety of different shows and be known for all of them.
Did you know any of the Emmerdale cast before joining the show?
Yes, I knew Jeff Hordley, Kelvin Fletcher, Sammy Winward, Lucy Pargeter and Steve Halliwell from the soap circles and awards ceremonies. Emma Atkins was in the year below me at university too, so it’ll be nice to see her when she comes back.
Don’t miss the Sharma’s arrival in Emmerdale at 7pm Friday 11 September on ITV1.