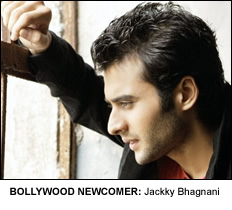 He was first introduced as an actor by Salman Khan, has toured with Kareena Kapoor, and performed at this year’sFilmfare Awards and IIFA’s. Jackky Bhagnani certainly has the right connections. After debuting with Kal Kissne Dekha, the producer’s son with the numerological name, looks destined to become the latest Hero No 1, as he starts shooting his second film.
Firstly, tell us about your new film, we hear it is along the lines of Jaane Tu Ya Jaane Na.
We start shooting from the first week of October and we’re doing the location hunting at the moment. It’s going to be somewhere in India. It has to be in India, because it’s a very India-based story, and for this film location plays a big role. It’s nothing close to Jaane Tu Ya Jaane Na. The problem is, if I tell people it’s a story about a group of friends they immediately assume it is along the lines of JTYJN.
Your debut Kal Kissne Dekha did not live up to the hype that surrounded its release, after being delayed by the Bollywood producers strike.
All I can say is that as an actor I did my best and people liked my performance. I’m not the kind of person to dwell on things. I like to move ahead and I’m already focusing on my next film.
Box office success or not, audiences seem to be already accepting you as Hero No 1, after touring with Kareena Kapoor and performances at this year’s Filmfare Awards and the IIFA’s
I’m grateful and thankful that my work as an individual has been accepted. Success is not in our hands, the only thing is our hands is to do a good job as an actor, and that’s what I’ll keep on doing.
The media in India seems obsessed with the fact that you lost 60kg to gain entry into Bollywood. Where did the story come from?
It started when Salman Khan came along on my birthday, and he told the press that I have known Jackky since he was really small and really big. There are a lot of people who can dance, who can act, who are producer’s sons, my weight less was something the media picked up on, and it was just an honest thing I shared with them. Despite being the son of Vashu Bhagnani I also had my own struggles entering the industry.
Although you have been tagged as a producer’s son, people may not know about your training as an actor.
I went to Lee Strasberg Institute in New York for nine months. It was superb. Apart from acting, you meet so many people from different countries, and get to experience performing in front of an audience.
Kal Kissne Dekha made use of a lot of overseas locations, where was your favourite shoot?
All these places overseas I had visited earlier, when I assisted my dad. From running around as an assistant to having the camera following for you is a big step, especially for someone like me who never thought I’d succeed in what I wanted to do. So everywhere I shot I enjoyed. Telling someone you want to lose 10 or 15 kilos you can understand- but 60? Even my dad said you are not so called actor material.
How important is the overseas audience to the success of a film?
You know, honestly, it is equally important. Because I’m a producer’s son I know how it works. Overseas business is really like an add-on value at the box office. Most of the box office receipts come from India and within that 60-70% from Delhi and Mumbai. But as an actor it is very important, as with overseas success your popularity increases.
How has your life changed since your first film was released?
Personally, I live the same life. I hang out with the same friends, I go to the small joints where I used to go and have coffee, and yes people recognise me everywhere I go now. Professionally, whenever people come up to me I give them the respect back because you know that’s what we work for. All they want is just a smile or maybe an autograph or a handshake or hug back, and as actors that’s what we should do.
Who is on your wish list to work with?
You have the top directors and a lot of new talent coming up onto the stage. I have a long list of directors which is about four pages long. As for heroines, a lot of people. I would love to work with Priyanka, Katrina, Kareena and Deepika. I really like Jacqueline Fernandez. I’ve seen her promos for Aladdin and I think she’s really good, really sweet and talented.
Finally, we have to ask. J.A.C.K.K.Y. seems missing from the baby name book. Do you believe in numerology?
I honestly do not believe in numerology at all. At all. I had a lot of fights with my mum though because she believes in it a lot. She thought it would be good to have double K in my name, and I’ve done it for her. I have no explanation as to what it does because I don’t believe in it. But I feel no mother would do anything bad for her child. At the end of the day, everything in this world works because of a mother’s intention. I guess I’m a little weird in the way I think.