Detectives step up hunt for killer of Mohammed Arshad 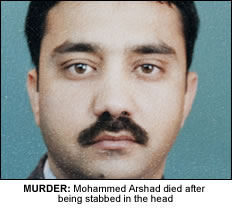 MALE residents of a housing estate close to where a Birmingham taxi driver was stabbed to death are being asked to supply DNA samples as detectives step up in the hunt for his killer.
Detectives investigating the murder of Mohammed Arshad are expected to spend weeks on the Hawkesley estate in Kings Norton photographing men aged between 14-40. They will also be asked to supply a DNA swab and a copy of their fingerprints.
Mr Arshad, a father-of-four, was found with severe head injuries on the evening of Wednesday 22nd July in Wast Hills Lane, Kings Norton. He had been stabbed several times in the head. His blue Ford Galaxy taxi was found abandoned about a mile away in Shannon Rd, Birmingham, which is close to the Hawkesley estate.
Police have put up a £10,000 reward in the hunt for Mr Arshad’s killer and are still eager to trace a man they believe was the last person to see the taxi driver alive.
CCTV images of a man, called Pete, who rang the taxi firm Mr Arshad worked requesting a taxi have been released by detectives.
Detectives, from both West Mercia and West Midlands Police forces, have begun house to house enquiries asking local residents if they recognise the man.
Detective Superintendent Sheila Thornes, who is leading the murder investigation, said: “These house to house inquiries are part of a process to trace Mr Arshad’s killer and eliminate members of the public who were not involved in the crime. We are keeping an open mind as to the motive of the killing.
“We are receiving tremendous support from the community on the Hawkesley estate in Kings Norton and are still keen to speak to people who recognise the man in the CCTV image or can help us identify a man calling himself Peter who rang A Cars at 8.19pm on Wednesday 22nd July. The call came from a telephone kiosk in Monyhull Hall Road close to the Spar shop, Peter asked to be picked up from outside Broadmeadow School nearby.”
Anyone with information about this murder investigation should call police at Redditch on 0300 333 3000 or Crimestoppers, anonymously, on 0800 555111.
Related Articles
CCTV clue in cabbie murder probe