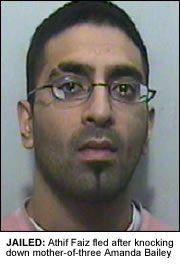 A 24 YEAR old man has been jailed for three years for knocking down and killing a mother-of-three before fleeing the scene.
Athif Faiz, of Leeds Road, Nelson, was driving at excessive speeds before he ploughed into 33-year-old Amanda Bailey in February.
He pleaded guilty to causing death by dangerous driving in June and was also disqualified from driving for five years.
Another man, Mohammed Tehseen Zaman, 19, also of Leeds Road was sentenced to 16 months in a young offenders’ institution after pleaded guilty to perverting the course of justice.
The court was told Ms Bailey, a mother of three, was struck by Faiz’s Vauxhall Astra as she crossed Leeds Road, Nelson, Lancashire on February 11 this year.
Faiz, who was said it court to have been “travelling at excess speed”, failed to stop after the collision and fled the scene.
Ms Bailey suffered serious injuries and was rushed to Royal Blackburn Hospital where she died.
A post mortem examination showed she died of multiple injuries.
Detective Inspector Pete Broome, from Lancashire Constabulary’s Force Major Investigation Team, said: “Faiz’s actions that night led to the death of a young woman who had so much to live for. His actions have not only left three young children without a mother, but a mother and father without their much loved daughter.
“This case highlights the stupidity of reckless, break-neck speeding, which played a huge part in this tragic incident. The terrible consequences of this collision should serve as a strong warning to people not to do this.