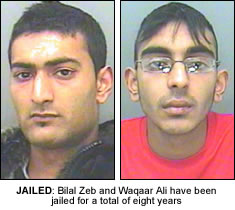 TWO Blackburn robbers who preyed on the homes of Asian families stealing over £100,000 worth of gold jewellery have been jailed.
Bilal Zeb, 20, and Waqaar Ali, 20, both from Blackburn targeted Asian homes in the city over a five month period.
The pair, whose prime motive was to steal high value gold jewellery, were responsible for 12 burglaries between September 2008 and February 2009.
They were arrested following a lengthy investigation by Blackburn police officers.
Both men were sentenced to four years each after pleading guilty.
PC Andy Lever from Eastern Division’s Burglary Team said: “Zeb and Ali are both prolific burglars who persistently targeted people’s homes on the lookout for Asian jewellery and I am satisfied with the result.”