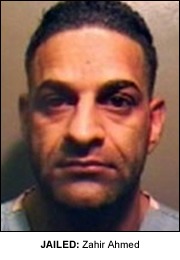 A man who was found guilty of the murder of Czech National Klara Prokopcova has been sentenced to 21-years at Luton Crown Court.
Zahir Ahmed, of Selborune Road, Luton, was sentenced on Thursday 18 June. During the trial the court heard how Klara, while out with Ahmed and a friend celebrating her 26th birthday, on 10 November 2007, had left a nightclub in Dunstable and was seriously assaulted by Ahmed. The 34-year-old then visited several places looking to leave Klara to die, but returned her home where he stage managed an accident before calling an ambulance.
Senior Investigating Officer, Detective Chief Inspector Sean O’Neil, of the Bedfordshire and Hertfordshire Major Crime Unit, said: “This was a violent domestic murder of a Czech National who came to this country in search of a better life and who deserved protection, but her life tragically ended after Ahmed brutally beat her.
“During the investigation it has become clear that Ahmed developed his relationship with Klara over a two year period and systematically abused her. This abuse caused her to become completely afraid of him.
“The jury could see through Ahmed’s endeavours to hide what he had done. I am satisfied that justice has prevailed and I know that Klara’s family are grateful that justice has been received.”
He continued: “Throughout this investigation we have been helped by members of the public, and members of the taxi driving community, and I would like to thank them for the courage they have shown.”