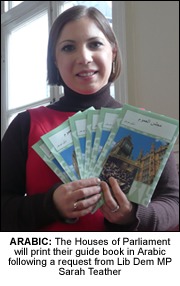 THE Houses of Parliament will print their guide book in Arabic for the first time.
The decison was made following a request from Liberal Democrat MP Sarah Teather.
Currently the Houses of Parliament print guides in a wide variety of world languages, including Chinese, Japanese, Russian and Urdu.
But despite a large Middle Eastern population now living in the UK, and the Houses of Parliament’s status as a world tourist destination, there has never previously been an Arabic language guide.
Sarah Teather raised the issue with Serjeant-at-Arms, Jill Pay, who agreed to organise the printing of an Arabic version.
“The parliament building is simply spectacular and a top destination for tourists from all over the world. Arabic is a major world language, and there is no reason why Arabic guides should not appear beside those written in Chinese, Russian or Urdu,” Ms Teather said.
“Parliament is here to govern for the whole country, and people from every community in Britain should feel welcome when they come to visit.”