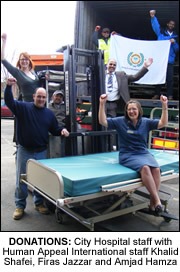 OLD Beds from three of Birmingham’s main hospitals are being donated to help patients in the third world.
Sandwell, City and Rowley Regis Hospitals invested nearly £200,000 last year in 100 new state of the art electric beds which were brought to replace ageing beds on the wards.
Faced with the dilemma of what to do with the old beds staff at Sandwell and West Birmingham Hospitals NHS Trust decided to donate them to charity.
They got in contact with Human Appeal International which ships second hand medical equipment to the Third World.
Today the charity picked up 35 beds from City Hospital which will be shipped out to be used by patients in the Sudan.
Two weeks ago the charity collected 65 old beds from the hospital which have already been sent out to be used in hospitals and medical centres in Bangladesh and Pakistan.
Masood Hussain, Finance Manager at the Trust, said: “I heard about the charity from one of the doctors at the Trust and thought they would be interested in having the beds.
“Rather than these beds being given to the scrap man for nothing they are being put to good use through the charity to be used by patients in poorer parts of the world who don’t have the benefits of a National Health Service like we do.”
In March the Trust donated 18 A&E trolleys which were replaced by new ones to the charity which were sent to help patients injured during the conflict in Gaza.