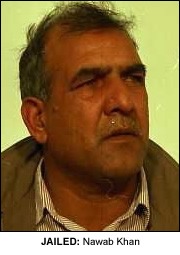 A FORMER taxi driver has today been jailed for nine years after being found guilty of the rape of a teenage girl in 1997.
Nawab Khan, 61, was convicted by a jury at Leeds Crown Court last December if raping the young girl in October 1997 while working as a taxi driver.
After the incident he fled the city and changed his date of birth and name from Fazal Elhi to Nawab Khan by deed poll, but was traced to an address in Doncaster last August by officers from West Yorkshire Police’s Operation Recall team.


Det Supt Colin Prime, who leads the Operation Recall team, said: “This is yet a further case showing the commitment by West Yorkshire Police to mount continual reviews of cases where there is potential to identify those responsible either by way of traditional investigation or advancements in Forensic Science.

“A further victim is today able to add some closure to this abhorrent attack, committed by a man trusted to provide her with a safe means of transport to her home having spent the evening socialising with friends.”

In a statement, the victim said: “I am extremely relieved that my case has been finally brought to a close. The man who attacked me avoided paying for his crime for all these years, whilst the effects of what happened that night has stayed with me.

“When the police asked me if I would co-operate by giving evidence in court, it was a very difficult decision to make. I knew I would have to talk about what had happened to me and relive that night.

“However, I found the strength to do so and I am pleased that he has been brought to justice for what he has done. I am happy with the sentence given, and I feel that I can now put this behind my and get on with my life.

“Although it has been difficult for me, I hope that this will encourage other women who have been through similar circumstances to come forward.”