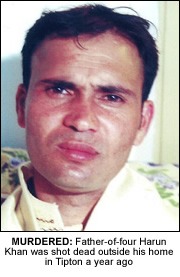 THE FAMILY of a taxi driver who was shot dead outside his home a year ago have today offered a £10,000 reward in a bid to bring his killers to justice.
Married father-of-four Harun Khan was gunned down outside his home on Tudor Street, Tipton on 3 March 2008.
The 39-year-old, known locally as ‘Tala’, was rushed to Russells Hall Hospital in Dudley but died despite frantic efforts to save him.
Police immediately launched a murder investigation with particular appeals for information on a male who was seen running away from the scene.
The man, who was wearing dark clothing and running with either a limp or peculiar gait, fled the scene along Tudor Street towards Coneygree Road. He was last seen turning right towards the railway bridge.
Today his distraught family announced details of the £10,000 reward as detectives revealed they were ‘very close’ to solving the case.
In a statement Mr Khan’s family said they were determined to have his killers caught.
“It has been a year since Harun was murdered. His murderers have not been caught and are still living their lives with their family and our loved one is gone,” the statement said.
“We want his murderers caught if someone knows anything about his murder please come forward and let the police know – it may save other people’s lives.”
Senior Investigating Officer DCI Jo Clews said the investigation has made “significant progress” over the last year but urged anyone with information to contact police.
“Over the last year this investigation has made significant progress and I believe that we are very, very close to determining why Harun was killed – and most importantly, by whom”, DCI Clews said.

“The local community have been helpful, however, I believe that there are people out there who know what happened and who did this and haven’t, for whatever reason, felt able to tell us.

“The family are offering a reward of up to £10,000 for useful information – a significant amount of money which I hope will encourage anyone who knows anything to come forward.

“All information will be treated in the strictest of confidence and may be crucial to the investigation.”
Anyone with information can call Crimestoppers on 0800555 111.