Can the cricket-loving nation survive this latest setback? 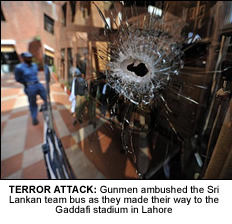 THE implausible attack on the Sri Lankan cricket team in Lahore may well signal the end of cricket in Pakistan.
In 1992 the great Imran Khan held aloft the coveted World Cup following a pulsating victory over England at the Melbourne Cricket Ground in Australia. Some years later he described that achievement as “one of the biggest days in Pakistan cricket history”. How ironic it is then that the events of 2 March may well be described in the same manner.
Here we take a look at the attack on the Sri Lankan team and how it could affect the future of the game in Pakistan.
‘Shootout in Lahore’ – what exactly happened?
The Sri Lankan team, in Lahore for their second Test against Pakistan, were ambushed as they made their way to the Gaddafi Stadium. Gunmen – some of whom were caught on camera – repeatedly shot at the team bus, shattering windows and killing six policemen who were escorting the team. A rocket was also fired at the bus.
The driver of a van carrying match officials just a few yards behind the Sri Lankan team bus was also killed.
Sounds horrific, no major injuries I hope
Thankfully none of the players were killed, although seven were injured. The team immediately flew back to Sri Lanka with the injured rushed to Nawaloka Hospital. Thilan Samaraweerahad shrapnel removed from his right leg, while Tharanga Paranavitanahad a bullet lodged in his chest. Spinner Ajantha Mendis underwent surgery to remove shrapnel from his back and head and vice-captain Kumar Sangakkara has shrapnel removed from his shoulder. Skipper Mahela Jayawardene was discharged from hospital after treatment for a minor leg injury, while Thilan Thushara and Sampath Lakmal also underwent hospital treatment.
Pakistani umpire Ahsan Raza was seriously injured from the contingent travelling behind. He was hit in the back by a bullet that seriously injured his lungs and liver, and underwent two major operations. Fresh reports suggest he is critical but improving.
I take it the rest of the tour has been cancelled?
Too right. The Sri Lankan team flew out immediately after the incident and abandoned the rest of the tour.
How have the cricket world reacted to this?
Understandably there are a lot of worried people about. The Pakistan Cricket Board (PCB) said they were “deeply shocked” by the incident hoping at the same time the International Cricket Council (ICC) wouldn’t make any hasty decisions about the future of international cricket in the country. But ICC chief Haroon Lorgat didn’t mince his words when he told reporters “the immediate future looks bleak”.
World Cup winning captain Imran Khan described the incident as a “disaster for Pakistan sport”, while former fast bowler Waqar Younis urged ICC bosses not to “let cricket die” in the country.
As is always the case, I bet some ‘finger pointing’ has started.
You’re not wrong there. English umpire Chris Broad, who escaped injury when the van he was travelling in just behind the Sri Lankan bus was repeatedly shot at, returned to England and levied some unsavoury comments about the incident.
He questioned why the Pakistan team bus didn’t leave at the same time as the Sri Lankan’s suggesting officials may have known about an attack. He told reporters: “On the first two days, both buses left at the same time with escorts, [but] on this particular day the Pakistan bus left five minutes after the Sri Lankan bus. Why? It went through my mind when I was leaving the hotel, ‘Where is the Pakistan bus?’
“After this happened you think, my gosh, did someone know something and hold the Pakistan bus back?” Understandably the PCB has reacted furiously. They have said they will lodge a protest with the ICC over the comments.
It’s not looking good for Pakistan is it? Aren’t they scheduled to co-host the 2011 Cricket World Cup?
Yes, Pakistan would have been joined by India and Sri Lanka for the 2011 Cricket World Cup. At this stage it looks highly unlikely they will be allowed to join that group – although who’s to know what will happen in a year’s time.
Don’t forget only recently the ICC decided not to stage the ICC Champions Trophy in the country on security issues. This was following the postponement of the tournament last year when a number of teams – including England – refused to travel to Pakistan. In the past year Australia, New Zealand, India, the West Indies and South Africa all refused to travel to the country. The fact that the Sri Lankan series was the first to be played on Pakistan soil since October 2007 says it all really.
So what will happen to ‘Home’ Test matches and ODI’s for Pakistan?
Well in the past year some ‘home’ series have been played in the United Arab Emirates and this looks a likely destination for forthcoming matches. Prior to the attacks Pakistan had already scheduled a series with Australia in UAE. England has been mooted as a possible neutral venue in an attempt to draw in the huge British Asian support the team has here. Realistically though it will come down to where the PCB will benefit the most financially.
So where does this all leave Pakistan? Will an international team ever set foot in the country?
That’s a tough question, and one that can only be answered in time. The one thing that fans and officials had going for themselves was that cricketers had never been targeted before. This has clearly changed. Furthermore lapses in the ‘presidential’ security offered to the Sri Lankan team will only question whether Pakistan cricket are up to the task of creating a safe environment for the world’s top cricketers.

By 2000, the percentage of outstanding subprime mortgage loans that had been securitized was roughly in line with perfect financial securitization.

For a relationship sim truly an application that will be good there’s not as...