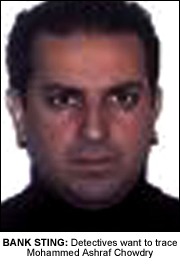 A MANHUNT has begun after more than a quarter of a million pounds was stolen from a bank account in Oldham.
Detectives at Greater Manchester Police have taken the unusual step of releasing a photograph of a man they want to speak to in connection with the audacious bank sting.
Police believe Mohammed Ashraf Chowdry, 41, could provide valuable information to the inquiry.
In July 2007, a man went into Natwest on Yorkshire Street and claimed to have an account with the bank. He managed to fraudulently access someone’s bank account, and withdrew £263,000.
Chowdry, who also uses the aliases Mohammed Tahir and Mohammed Ashraf, is linked to addresses in Stockport, North Manchester, Tameside and Bury, though officers have not yet managed to trace him.

Detective Sergeant Darren Grafton from Oldham CID said: “We believe that Chowdry is moving from one place to another.

“We would like to appeal to those people who have been taking him into their homes, and to Chowdry himself. He needs to come forward and assist police with this criminal investigation.

A 27-year-old man has been arrested in connection with this incident and he remains on police bail.