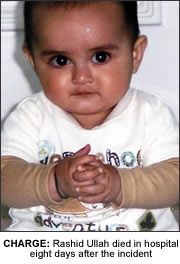 THE father of an 18-month-old boy who died after being accidentally shot in the back of the head with an air rifle has appeared in court in connection with his death.
Bakht Zaman, 29, appeared at Birmingham magistrates charged with causing or allowing the death of a child.
The incident relates to the death of his young son Rashid Ullah last August.
Young Rashid was hit in the back of the head with a .22 pellet from an air rifle at the family home in Washwood Heath, Birmingham.
He died in hospital eight days later.
Mr Zaman was released on bail to appear before the city’s crown court on 1 May.