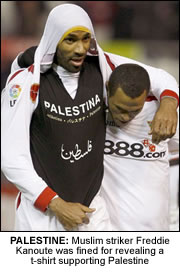 FORMER Tottenham Hotspurs striker Freddie Kanoute has been fined after he revealed a t-shirt with a message supporting Palestine during a cup game in Spain.
The Muslim striker, who plays for Spanish side Sevilla, was fined an unspecified amount by the Spanish Football Federation for his post-goal celebration.
After scoring for his side in the Copa Del Rey cup game against Deportivo La Coruna, Kanoute, who played for Premiership side Tottenham Hotspurs, lifted his top to reveal a t-shirt with the word Palestine across the front, as well as words in Arabic.
He was cautioned by the referee during the game.
Media reports have suggested he was fined €3,000.
Kanoute, a practicing Muslim, has in the past refused to wear a team shirt with a gambling logo on it in view of his religious beliefs.

Relationship by Phonelight: The 9 Better Relationship Applications. The secret to choosing an excellent relationship application try locating one that enables you to bring...

‘The experience made all the pain worthwhile’