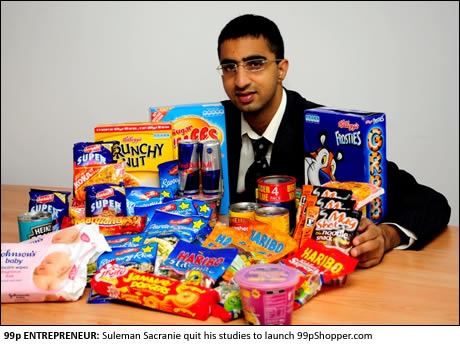 A YOUNG Leicester entrepreneur is becoming a household name – thanks to his budget online shopping website!
Discount shopping website 99pShopper.com caused a sensation when it launched on the web in August, offering popular brand-name items at just 99p or less.
The site was launched by 21 year old Suleman Sacranie who is already hoping to franchise the concept and expand into shops across the UK and Europe.
The site is proving to be a hit with ex-pats eager to snap-up their favourite British food brands online and is also already popular with UK based bargain hunters with an amazing 12,000 orders taken in the first two weeks of trading.
Suleman said the idea for 99pShopper.com was inspired by his father Aziz, a former shopkeeper from Leicester.
“I grew up above a small supermarket so it’s fair to say retail is in my blood,” Suleman told The Asian Today.
“My Dad opened the shop on the day I was born – dashing out of the hospital to sign a contract and then dashing back again to be at my mother’s side.
“My Grandad also has a string of shops in Leicester so I grew up around business and that certainly rubbed off on me.”
But despite this family background in retail when it came to launching his own business Suleman said he faced some opposition from his family.
He said: “My parents urged me to go into one of the professions rather than go down the business road. So I ended up studying chemistry at Leicester University but the academic life just wasn’t for me.”
He was so unhappy that he decided to launch his own business and has now placed his chemistry studies on indefinite hold while he concentrates solely on 99pShopper.com.
He said: “The idea came to me last summer. I was lying in the bath racking my brains. I knew I didn’t want to return to university where I was bored and unfulfilled.
“I was thinking about my Dad’s shop and the rise of discount stores such as Poundland during the recession. It hit me like a bolt of lightning. Why don’t I build an online discount store? A shop that sells everything you can get in a supermarket but all for 99p or less.
“I jumped out of the bath and ran to tell my dad. He immediately said, ‘Brilliant idea let’s make it happen.’ His support was really fantastic.”
Family connections helped when it came to sourcing suppliers but turning his business dream into a reality wasn’t all plain sailing. Suleman had problems with web developers before finally finding the right company to build his site.
He said: “The one piece of advice I would give to any other entrepreneurs is don’t outsource your web development outside the UK. I tried and it was a terrible experience. It’s taken every ounce of my determination and self belief, to come back from that and make the site a success. I finally found a great UK based developer who has helped me to create a site I’m very proud of.”
Suleman’s web developers have helped him create an easy to use site which presents his bargains well and which has already had a huge impact with British shoppers.
A return to chemistry studies looks unlikely.