Home Interviews ‘The experience made all the pain worthwhile’ 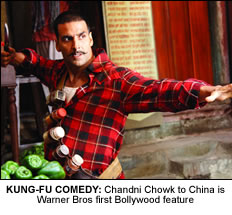 2008 was a pretty impressive year for Akshay Kumar.
Not only did he retain his crown as the ‘King’ of the box office he proved no challenge was beyond him. Seriously, who else would have managed to get the king of Hip-Hop, Snoop Dogg, into the Bollywood set-up? This year is set to be no different for Akshay. With a host of films lined up for release, fans will also get a chance to see him In the Hollywood-starrer ‘Kambakht Ishq’ alongside Sylvester Stallone and Arnold Schwarzenegger!  Later this month he stars In the Warner Bros led-picture ‘Chandni Chowk to China’ – a Kung Fu action comedy that is already being billed as one of Bollywood’s best for 2009. For the first time in Bollywood history the super-powers of Asian cinema unite. Chinese star Gordon Liu – who played the unforgettable role of ‘Pai-Mei’ In Quentin Tarantino’s ‘Kill BILL’ makes his first foray Into Bollywood and Is joined by a supporting cast of Deepika Padukone and Mithun Chakraborty. Zakia Yousaf spoke to Akshay about his role In ‘Chandni Chowk to China’…
Akshay tell us a bit about your new film ‘Chandni Chowk to China’ and your role In It.
‘Chandni Chowk to China’ is Bollywood’s first real Kung Fu action comedy. It’s about a simple cook called Sidhu from Chandni Chowk, who is mistaken for an ancient reincarnated Chinese warrior by the villagers of an oppressed Chinese village. It reminds me so much of my own days as a cook and my passion for learning martial arts. I wasn’t born with a black belt you know, and the training I had to undergo in this film brought back many a painful memory! Basically it’s a role where my character cooks, trains, dances, and kick’s ass just like me, so if you like me I think this is my masterpiece (In my eyes anyway!) But I must say it was an honour and one of the most exciting experiences of my career be able to work with legendary veterans Gordon Liu from ‘Kill Bill’ and of course our Mithun Dada.
What was it about the script that attracted you to the project?
When I signed the movie there was no script, Nikhil Advani Sir showed me the poster only and I loved it there and then. The incredible script was just a bonus for me as I already fell in love with the concept. Sometimes it’s the small things that outline our destinies; the big things just fill in the gaps.
Was playing this character a challenge for you?
The character ‘no’, the role ‘yes’. I loved my character, he’s such an innocent duffer with a heart of gold, you know nothing is simple or easy for him, so creating so many characteristics for one person is the most exhilarating thing an actor can do.
Portraying Sidhu was like playing myself through and through, and I know one doesn’t get to play oneself often so I know I’m going to miss him. Don’t get me wrong, yes I had fun but the pain of the action soon took the smile off my face! I loved it but comedy is so much easier compared to straps and harness’s being tied round your precious parts and Chinese ninja’s beating you up 10 hours every day!
Seems like you had quite a painful experience Akshay! What kind of training did you have to undergo for the action sequences?
Kung Fu training obviously, I knew the kind of talent I was about to be up against so my martial arts had to be polished, so It was back to the grind stone, severe conditioning and stretching day in day out then rehearsals for the sequences which was by far the best bit. There’s nothing better in life than going to bed at night knowing you just trained your ass off to create good cinema. It makes all the pain feel worthwhile!
You’re famed for doing your own stunts – did you get into any difficulty with the stunts in this film?
No, I’m a good listener and Dee Dee (stunt coordinator) is outstanding, he makes you rehearse so many times before your take that you are too scared to get it wrong by that point. The stunt team was brilliant; especially when I had a few painful injuries along the way not to mention my slipped disc but nothing compared to what Jackie Chan has gone through believe me!
As a martial arts expert yourself what was it like working with the great Gordon Liu?
He is quite a legend In the Kung Fu world. I watched his film ’36 Chambers of Shaolin’ 52 times to learn all his tricks of the trade as the thought of Gordon Liu chopping me up into pieces with his famous one-inch punch gave me sleepless nights. (Just joking)! I just wish my father could have seen me work alongside the very man he saw me idolise as a young man; a day I thought would never come. 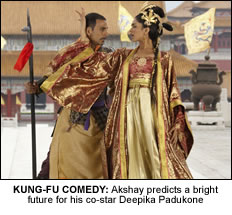 Your co-star Deepika Padukone has been quoted as saying ‘I want to be the female Akshay Kumar’. How do you feel about this comment?
‘Good Luck’ because It isn’t easy! What can I say? As long as you duck at the right moment and block your pretty face I’m sure the world will love to see her be like me! I don’t know if my facial hair will suit her though but she’s definitely got a good right leg there, so all the best! I must say I am flattered though.
What was it like working with Deepika?
Oh its bliss working with newcomers, they haven’t learnt the bad tricks yet unlike some! Only kidding ladies! She was very good at what was required of her and she should be honoured at such a young age to have been given the chance to work with such great people – I had to wait nearly 20 years! I’m proud of what she’s done; she has a good head on her shoulders. Only time can tell her future, but I have a feeling it will be a very bright one.
One of your main hits in 2008 ‘Singh Is Kinng’ was a massive success worldwide – do you think Chandni Chowk to China can be as big of a hit?
Do I look like I can predict the future! Sorry that was my nerves talking there! It has the capacity and the essence to be as great a hit maybe even more, but I’m not one to toot my own horn and I refuse to jinx myself. It’s entirely up to the audience, what I feel is great may not be others opinion b but I can do no more. Now I just pray and leave my future successes in the lives of my people, oh by the way have I ever told you how much I love my people! (wink wink)
Bollywood has such an International presence at the moment. What do you think this can do for the Industry on an International scale?
The Indian Film Industry started out in 1916 and has grown into a multimillion dollar Industry. As the years go by we are making many urban modern day movies but they will always have a touch of ‘Massala’. Indian films will always be Indian. It is a genre within itself albeit adaptable to new audiences and wider changes in the world of cinema, but without losing its core essence. The biggest transition will always be understanding and respecting people’s cultures and the way it works in other countries. We are all same but different. We work a certain way and so do they, but every International crew that I have worked with has been Incredible, It opens your eyes just like we open theirs. Mostly theirs is out of shock because they can’t believe how we manage to make things work the way we do, but it’s fascinating though.  We are two Industries that are capable of connecting extremely well. But neither one is trying to become the other; we are just creators that love cinema worldwide. I think Bollywood is doing what it has always been doing i.e. creating magic but on a much wider, scale.
2008 was a massive year for you at the box office. Are you confident of replicating this success in 2009?
Considering I just feel damn lucky that I’m still even here today I think me asking for more this year than I achieved last year would be more than just the icing on the cake. It’s not about confidence, it’s about what the people feel is good to them at that time, and we are only here because of them. I could be the best actor in the world but if audiences don’t like me then I’m screwed. I could make a wonderful movie but if the timing is wrong then again I’m ruined. It’s not luck I pray for its opportunities, and all I can say is ‘I know I give my up most best to every opportunity ever given to me, and that goes without saying.
What big ‘Akshay Kumar films’ can we expect in 2009?
‘Blue’ ‘8×10’ ‘De Dana Dan’. That’s not to mention the others I’ll be shooting for next year. Please feel free to tell me if you’re getting sick of me!
Finally Akshay, do you have a special message for your fans In the UK?
Yeah I hear it’s pretty cold over there right now! Just think of me and I’ll keep you warm, unless you’re a guy then think of Katrina, or Deepika or just anyone but me! Guys I must say I can’t wait to come to London for my premiere of CC2C, I hope you all come to see me for a new year’s hug, you know I love you, keep up all your new year’s resolutions, and listen to your parents whether you like It or not because no kidding guys they always know best! Love and prayers your even bigger fan Akshay xx.
Chandni Chowk to India is released in the UK on 16 January
Related Articles
Chandni Chowk to India – Bollywood Film Review with Manish Gajjar