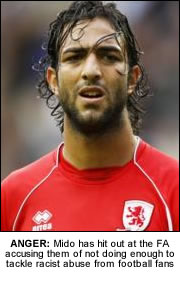 MIDDLESBOROUGH Football Club and the Football Association have expressed their disappointment that a Newcastle fan who admitted hurling racist abuse at striker Mido was not handed a banning order.
Barry Norman Hutchinson, 49, of Silver Lonnen, Fenham, pleaded guilty to an offence of racist or obscene chanting under the Football Offences Act 1991 during the Magpies’ 0-0 derby draw at Middlesbrough on November 29 at Teesside Magistrates’ Court yesterday.
His 23-year-old son, Barry Andrew Hutchinson, denies the same charge.
Egyptian international Mido was targeted by a section of Newcastle fans as he warmed up on the sidelines during the derby match.
Last season the player suffered almost identical abuse, again by Newcastle fans.
Hutchinson Snr was fined £270 with £45 costs, but escaped a banning order that would have prevented him attending games anywhere in the country.
Both Middlesbrough and the FA expressed concern their hard-line policies had not been supported by magistrates.
A Boro spokesman said: “We are disappointed that a banning order has not been issued in this case.
“It makes it very difficult for football clubs to have a robust anti-racism policy without the support of the courts.
“Despite this setback, we will continue to be vigilant and supportive of the police in tackling all discriminatory and anti-social behaviour.
“The individual concerned will also be banned from the Riverside [Stadium].”
An FA spokesman added: “The FA is disappointed that a football banning order was not imposed in this case.
“It is important to send out a strong message that racist and discriminatory chanting is totally unacceptable, and that anyone found guilty will face serious consequences.
“We welcome Middlesbrough FC’s commitment to ban the individual convicted in this case.”
Related Articles
Mido blasts FA over racist abuse

The Sikh Channel to go Live on BARB Rating System

Student Jailed for Buying Pistol and Ammunition on the Dark Web