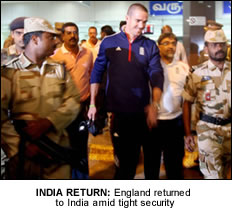 ENGLAND’S players have pledged to donate half their match fees from the opening Test against India to the victims of the terror attacks in Mumbai.
Following a meeting at the team hotel in Chennai today, the players issued a joint statement pledging fees of around £35,000 to help those affected by the attacks two weeks ago, which killed almost 200 people.
The statement, which was read by opening batsman Alastair Cook, said: “The England players will donate half their match fees from the first Test match to the families of those victims of the Mumbai attacks.”
It also underlined England’s reasons for returning to India following a week of soul-searching over whether to go back in the aftermath of the attacks.
Their return signified their “open and public statement of support for the Indian people following the tragic events in Mumbai recently”, according to the statement, where they also extended their sympathies to those affected by the attacks.
Cook added: “We have made a massive pact this morning at our meeting when we came up with the statement that this is it and nothing else can distract us from playing cricket.
“It was something that everyone wanted to get across because as a side we felt we wanted to do it.”
But, as England began preparations for the start of the series at the Chepauk Stadium, Cook admitted the disrupted warm-up programme could bond the team together.
The Essex left-hander famously scored an unbeaten century on his Test debut at Nagpur two years ago, having arrived from the England A tour in West Indies following an injury to then captain Michael Vaughan.
Cook’s success in similarly disrupted circumstances has given England hope they can defy expectations and compete against an India side who beat Australia only last month.
“What has happened recently has been taken out of our control but this side has got behind each other and made some tough decisions,” he continued.
“We’re here as a unit now and we have to play some cricket. The preparation isn’t ideal but I came here two years ago, flying half way around the world and had one training session and then played so it can be done – you don’t just suddenly lose your technique overnight.
“I remember turning up for my first Test match and jet lag doesn’t really affect you when you’ve got adrenaline kicking through your body.
“You can use any excuse about the preparation but I turned up last time having travelled all the way around the world and luckily I performed well on that day.
“It proves if you’re mentally switched on you can achieve things and that’s what we need to do as a side now.”
As England practised at the stadium, the ever-present security was evident with the Rapid Action Force, a heavily-armed branch of the police department, guarding the outfield at all times.
But when the steady rain that ruined India’s session earlier in the day finally ceased, England were able to return to playing cricket again with Ian Bell and Andrew Strauss the first in the nets to begin England’s Test preparations.
“First and foremost we are cricketers and we just want to play cricket,” said Cook. “It will be great to get back to something we know and something we know more about rather than talking about stuff we don’t really know about.
“Abu Dhabi was brilliant in terms of training but we still had that overlying thought of what the security report would say.
“Now it has come back and said it is safe we’re very excited about playing cricket and not worrying about other stuff we don’t really know about.”

Zayn Malik Leads British Asian Stars in Support for ‘Give A Girl A Future’...

Is it possible to get the home loan paid off? What you want to...