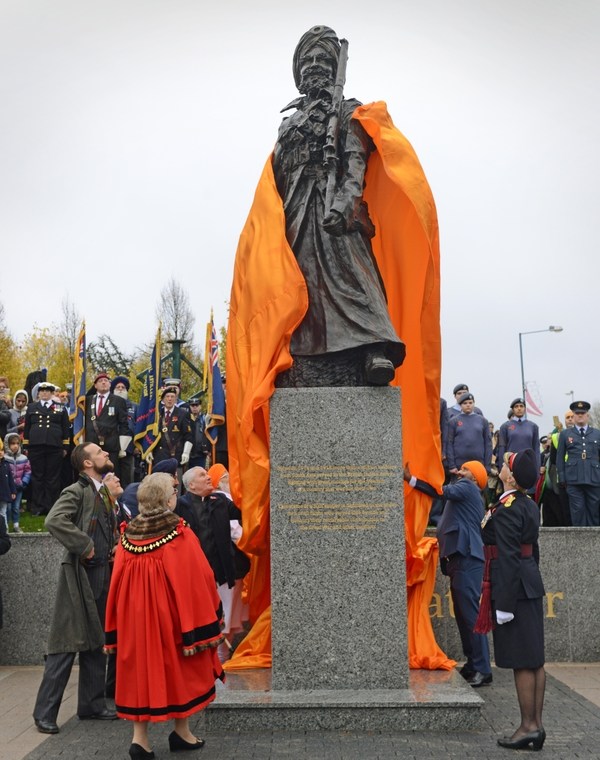 The High Street in Smethwick saw hundreds of people gathering to witness the unveiling of the Lions of the Great War monument, a 10-foot high bronze statue of a Sikh soldier, cast to commemorate 100 years since the end of the First World War.

The statue standing outside the Guru Nanak Gurdwara Smethwick is to honour the millions of men from the British Indian Army who served in the two world wars.

Jatinder Singh, president of the gurdwara, said: “I’m absolutely so proud. The contribution of Sikhs and of all of the faiths that came over from South Asia is immeasurable.

“It’s so amazing. And the response from the community is just incredible, this statue has got such a big connection to so many.

“In the past, the Sikh contribution – and all the faiths from South Asia – was missing from British history but now it will go down in British history.

The Lions of the Great War statue, which sits on a 6ft granite plinth, is now permanently based between High Street and Tollhouse Way.

Artist Luke Perry said the statue had taken months of hard work but that it felt amazing to finally see it finished.

“It’s a real relief to actually have the sculpture installed because once its in the ground or on a plinth your job is essentially done structurally, and it looks fantastic,” he said.

“Just the amount of people here, the whole drive behind this entire thing, for it to be a statement of togetherness and unity, is incredible.

“Modern Britain is a mixture of cultures that work together and everybody’s here – it’s like Martin Luther King’s dream – it’s beautiful. I’m really proud of that. It’s a real honour and I have loved being part of this – being part of history.”

Leader of Sandwell Council Steve Eling gave a speech at the unveiling, and added: “This is something that people in Smethwick and in Sandwell can be extremely proud of.

“The contribution of British Army soldiers from the Indian subcontinent is largely unrecognised. “Whenever we hear people talking about the sacrifices soldiers have made it’s very rare soldiers from the Indian subcontinent are mentioned – so to have this reference that, and as a reminder forever after of that contribution, I think is fantastic for this area.”

A marching band paraded down High Street and members of the gurdwara sang the Sikh national anthem to the crowds before the unveiling.

A minute’s silence was also held ahead of Remembrance Sunday next week.

Speeches were made by MP for Edgbaston Preet Kaur Gill, the first Sikh female member of parliament, MP for Warley John Spellar, and Angela Lewis, the head of programmes at Fields in Trust.