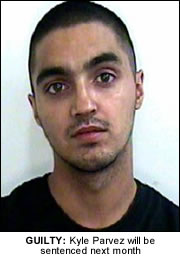 A PRESTON man has been found guilty of the attempted murder of a 26 year old man following a shooting in the city in April.
Kyle Parvez, 20, of Arnhem Road was convicted by a jury at Preston Crown Court over the attempted murder of Dilbag Singh who survived the attack despite suffering multiple gunshot wounds to the neck.
Preston Crown Court was told doctors removed 56 pellets from Mr Singh’s upper body after he rushed to hospital following the attack.
Parvez, who denied the charges, was also convicted of possession of a firearm with intent to commit murder.
Another man, Zainul James, 18, of The Green, Ribbleton, was found guilty of arson, being reckless as to whether life was endangered in relation to the burning of the getaway car.
Prosecutor Katherine Blackwell told the court tensions between two sets of gangs in the city culminated in the attempted murder of Mr Singh.
On the night of the attack Mr Singh was stood chatting to a friend at the junction of St Paul’s Road and St Stephen’s Road in Preston when he noticed a Renault Clio containing four men being driven towards them, the court was told.
The car stopped and two of the men got out before one of them shot Mr Singh in the neck from a distance of 10 or 12 feet. They got back in the car before making off; it was found burnt out a short time later.
Detective Chief Inspector Des Coop, who led the investigation said: “I am pleased with today’s verdict and I would like it to serve as warning to anyone who thinks gun crime is acceptable.”
Parvez and James will be sentenced on 23 December at Preston Crown Court.