Mohammed Rashid to be sentenced next month 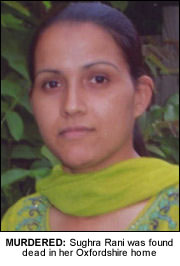 A MAN has pleaded guilty to murdering his wife at their Oxfordshire home.
Mohammed Rashid, 35, appeared at Oxford Crown Court in relation to the death of his wife Sughra Rani, 30.
Mrs Rani was found by Thames Valley Police at a property in Mold Crescent, Banbury, after officers were called there on Tuesday, 16 September.
Rashid, who spoke only to confirm his name and enter a plea, has been remanded in custody and will be sentenced on 5 December.
A statement released by Mrs Rani’s brother Mohammed Munawwar at the time of her death described the mother-of-two as a “good daughter, daughter-in-law and mother”.
The statement added: “Her family will miss her greatly; she was extremely hard working and cared for her family. Her tragic death has caused immense sadness to her family and she will be sorely missed.”