Home Interviews ‘Ashwariya had me suicidal’ 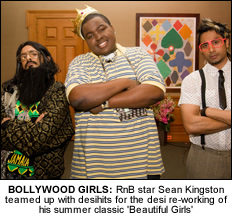 LAST year fresh-faced Sean Kingston burst onto the music scene with his number one hit ‘Beautiful Girls’. It fast became the anthem of the summer as it catapulted to the top of the US and UK charts – turning the young 17-year-old into a star overnight.
Now the fun-loving singer has gone all Bollywood – joining up with DesiHits to rework his biggest hit to the tune of ‘Bollywood Girls’. Sean gave his original hit a deserved desi makeover as part of a global DJ competition on the website. Five of the world’s top desi producers were asked to submit their own remixes to the song with website users able to vote for the best. We caught up with Sean to find out how the project came about and what he really thinks of Bollywood girls…
Sean how did ‘Bollywood Girls’ come about and what made you agree to the project?
The project came about when DesiHits were talking about substituting my song ‘Beautiful Girls’ for ‘Bollywood Girls’ and we all thought it would be great. I didn’t know too much about Bollywood until they started telling me more. I checked it all out, the music, movies and really liked the vibe and the style and thought why not. Reworking the lyrics to my track was a no-brainer. We worked on a new mix of Bollywood Girls with new lyrics in the studio, it was fun. Y’all need to vote on the site to help me pick the best remix!
How much did you know about Bollywood before you got involved in the project?
I knew that there were some beautiful women in Bollywood! I learnt a lot from DesiHits and also by checking things out on my own. I heard the music and tasted some Indian food for the video show I did with the Bollywood Bar Stewards. I know that everyone goes to the movies!
You name-drop some incredibly beautiful Bollywood women – is there a particular one that stands out for you?
That’s a hard one! They’re all so beautiful. One look at Ashwariya had me suicidal! I think Ash is beautiful but also Katrina, Celina, Bipasha and Malaika. The song is dedicated to all the beautiful women of Bollywood. Can you get me Malaika’s number? (Laughs)
You’ve teamed up with DesiHits for the ‘Bollywood Girls Remix Project’. You had five talented Asian DJ’s fighting it out to produce the best remix to your track – did you offer any of the guys advice and what are the ingredients to a good remix?
Not really because they’re the best at what they do. They all have different styles too y’know? I wanted them to create something that sounds completely different to the main track and something that will just stand out, like a whole new track. Sometimes remixes sound similar to the main song and that’s not what it’s about. It’s about taking the main ingredients and then coming up with something different that can add to the main mix.
Bollywood has really taken off in the West. What did you make of Snoop Dogg being involved in the title track to the film ‘Singh is King’?
Yeah I heard about that, it was big news. It’s good to see the urban scene and the desi scene working together. That’s what DesiHits are working on to bring both together y’know? I’m glad they like RnB and pop music that we create out in India. I would like to go over there and do some more collabos.
Like Snoop can you see yourself wearing that turban and getting involved in a Bollywood film?
Yeah! If Snoop can rock that! I would love to take part in a Bollywood movie. We made our own mini movie for the Bollywood Bar Stewards show for DesiHits as part of this project. Y’all have to see it and let me know what you think.
You can watch the exclusive webisode with The Bollywood Bar Stewards featuring Sean Kingston [drinking lassi, eating ladoo, talking about his Bollywood babes and more] on www.desihits.com
Interview by Zakia Yousaf