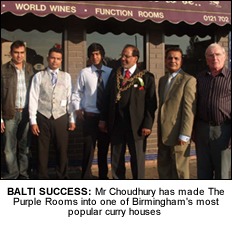 ONE of Birmingham’s best loved restaurateur’s is celebrating 20 years at the helm of one of the city’s most popular curry houses.
Faiz Choudhury has turned his restaurant The Purple Rooms into one of Birmingham’s favourite curry houses.
Over the last 20 years the restaurant, famed for serving an exquisite blend of Bangladeshi and Indian cuisine, has notched up an impressive list of accolades including a Good Food Award and winning the Egon Ronay honour a mighty seven times.
“Birmingham was always the star attraction city for Indian food,” Mr Choudhury said. “Balti cuisines were established in Birmingham and it will always be the county’s Curry Capital.”
“I am proud to have given much to the community, only wishing I could give more. “Being self employed and having The Purple Rooms behind me has helped me get through the years and achieved what I have. Also, having my eldest son; Hesan helping me at The Purple Rooms for the last few years has been a tremendous benefit. “We all have to work together as friends, family, community and as one nation to achieve gaols.”
Mr Choudhury was awarded a prestigious MBE award by her Majesty the Queen in 1998, for his services towards the community.
He is also a keen humanitarian who has raised hundreds of thousand of pounds for local charities.
His eldest son Hesan is all praise for his father.
“I am very proud of my father and what he has achieved over the years. I’ve learnt that running an establishment for so many years is not as easy as my father makes it look” said Hesan, who promises many more years of ‘Purple dining’.