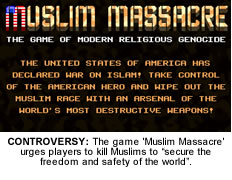 AN INTERNET game which urges players to kill Muslims has been branded “deeply offensive” by leading British Muslims.
The game, ‘Muslim Massacre’ sees players take control of an American solider with the aim to “ensure that no Muslim man or woman is left alive”.
Available as a free download the games creator known only as Sigvatr tells players they must kill all Muslims to “secure the freedom and safety of the world”.
Enticing internet goers to download the game, the synopsis reads: “The United States of America, a leader and role model for all in the modern world, is taking drastic measures to secure the freedom and safety of the world. Having born witness to the atrocities of the followers of Islam time and time again, it has been decided that the entire Muslim race shall be wiped from the surface of the Earth.
“You, the American Hero, have valiantly volunteered to make landfall in the Middle East and ensure that no Muslim man or woman is left alive. Your mission priorities are to seek out and neutralize the Muslim leader Osama bin Laden, their radical cult leader Muhammad and finally Allah, taking down any targets you meet on the way.”
While creator Sigvatr described ‘Muslim Massacre’ as “fun and funny”, British Muslims condemned the game saying it was guilty of “trying to justify the killing of innocent Muslims”. 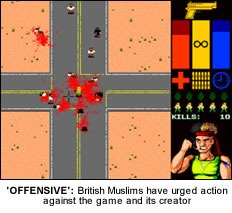 Mohammed Shafiq, Chief Executive of the Foundation said: “Encouraging children and young people in a game to kill Muslims is unacceptable, tasteless and deeply offensive. There is an increase in violence in this country and some of it comes from video games.
“When kids spend six hours a day on violent games they are more likely to go outside and commit violence. If it was the other way around, with a game featuring Muslims killing Israelis or Americans, there would be uproar and rightly so.
“I would urge ISPs to take action against sites like this and there can be no justification for this sort of video game.”
As controversy over the game grew its creator argued too much was being made out of his creation.
“The Muslims represented in the game aren’t meant to be based on actual Muslims”, he said.
“If I was to try and come up with a meaning for the game at this moment, it would probably be something along the lines of metaphorically destroying the stereotypical depiction of a Muslim.”