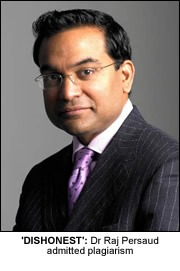 THE CAREER of renowned psychiatrist Dr Raj Persaud was in tatters after he was declared ‘unfit to practice’ after admitting plagiarism.
The psychiatrist, known for his endless TV work, was branded “dishonest” by the General Medical Council after he admitted passing off other doctors’ work as his own. He could now be struck off the medical register.
Dr Persaud admitted nine counts of plagiarism, but denied dishonesty and professional misconduct.
But a GMC panel ruled that he had brought the profession into disrepute through his actions.
Dr Anthony Morgan, chairman of the GMC’s Fitness to Practise panel, sitting in Manchester, told him: ‘You are an eminent psychiatrist with a distinguished academic record who has combined a clinical career as a consultant psychiatrist with work in the media and journalism.
‘The panel is of the view that you must have known that your actions in allowing the work of others to be seen as though it was your own would be considered dishonest by ordinary people.
‘The panel has therefore determined that your actions were dishonest in accordance with the accepted definition of dishonesty in these proceedings.’
He added: ‘The panel has determined that your actions, in plagiarising the work of others, were liable to bring the profession into disrepute.’
‘The panel has determined that your actions were dishonest and were liable to bring the profession into disrepute.’
During the hearing Dr Persaud repeatedly apologised for his actions and blamed the stress of juggling his media and NHS work. He added he “deeply regretted” not using quotation marks.
His actions centre on his 2003 book From The Edge of The Couch and a number of articles which were published in the British Medical Journal and The Independent in which he copied the work of other academics passing them off as his own.