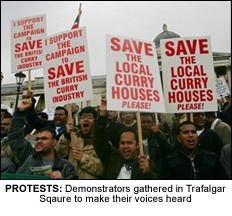 THOUSANDS of people gathered in central London yesterday to protest over new immigration rules they believe will damage the future of the great British curry.
Restaurant owners, workers and supporters waved placards and called for the government to change new immigration rules, which caterers have said damages chances of finding skilled chefs from the sub-continent.
The protest, organised by the Ethnic Catering Alliance, saw a mix of Chinese, Bangladeshi, Indian, Pakistani and Turkish communities take part.
Organisers say the new points-based system for non-EU immigrants has led to a shortage of kitchen staff.
Under the proposals, migrants are only allowed to work in the UK if they meet a specific criteria – one including the ability to speak proficient English.
A spokesperson from the Ethnic Catering Alliance said: “We respect the government’s new immigration policy, believing that it has been introduced in the national interest, but we are unable to understand why Government can not find an initiative that will furnish us with the opportunity to fill our kitchen vacancies with appropriate staff and save the curry industry.”
The spokesperson continued: “Imposition of new immigration law since 29th February 2008 doused our hope for any special curry house scheme to recruit skilled curry staff from abroad. Bangladeshi owned curry houses, which annually contribute £3.5 billion to the British economy, have long been suffering from acute staff shortages.”
The protesters received backing from London Mayor candidate Ken Livingstone, who despite not attending, prepared a statement which was read out by Sadiq Khan MP.
Mr Livingstone said he was “totally opposed” to the immigration restrictions, adding “the idea that people from Europe can substitute for people from the Indian sub-continent, Chine, Turkey and the other cultures your cooking represents is self-evidently absurd”.