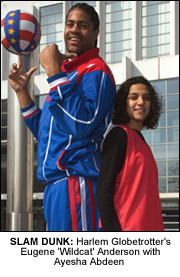 IT was the day a Raven met a Wildcat. Standing at a towering 6″6 ins tall, Harlem Globetrotter Eugene ‘Wildcat’ Anderson took time out of his touring schedule with the world famous team to meet Ayesha Abdeen, a member of the Harrow Ravens side.

Ayesha’s team, set up in 2001, are a rarity as one of only two Islamic women’s basketball teams in London. Supported by Harrow Council, the team are competing in the Islamic Women’s games being held in Iran next year.

But it was back to basketball court basics outside Wembley Stadium as Anderson demonstrated some of the moves that delight millions of fans.

Ayesha – slightly in Wildcat’s shade with a height of 5’2ins – and seven teammates watched the Harlem Globetrotter’s demonstration with admiration. The 24-year-old Harrow sportswoman said: “It was a fun day, Eugene is a really nice guy and we learnt some new moves from one of the world’s best.”

Harrow Council is looking to support the Harrow Ravens by providing special ‘zoned-off’ training areas in council leisure centres. That will allow the Muslim team members to train in accordance with their religious principles in a female-only environment.

Eugene Edgerson said:  “The MWSF Ravens are an inspirational group of young women.  They highlight how sport crosses all cultural divides and brings people together.”

The 30-year-old, from New Orleans, added: “I really admire the team and am sure in 2009 they will bring back gold from Iran.”

Councillor Anjana Patel, Harrow Council’s portfolio holder for community and cultural services said: “Harrow Council encourages and supports different communities to participate in sports and leisure activities.  This ladies basketball team is a great example of how we support sport throughout the community – it is one of the more unusual teams we have but it shows the diversity within Harrow.”

Welcome to the February Edition of The Asian Today

Hindu and Muslim Babies Switched at Birth Refused to Swap