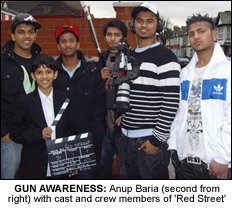 A LONDON student is hoping to raise awareness of the dangers of guns after completing a short film on the subject.
19-year-old Anup Baria, a student at the Ealing and West London College, took to the streets armed with a camera for the short film titled ‘Red Street’.
The film, which was shot in Wembley over a three-week period, has already received positive feedback.
With gun crime rising to unprecedented levels across London, Anup said he hoped his short film would convey a serious message about the dangers of guns.
Speaking to The Asian Today, Anup revealed how the idea for the film came about.
He said: “I was walking home one day and I saw all the roads blocked at Wembley Triangle and I heard few people saying that a man had been shot. The incident happened in my area and I couldn’t stop thinking about it for couple of days. It was after this that I came up with the idea to make a short film on the dangers of guns.
“I want to reach out to as many people as possible with this film and really address the issue of guns. I want people to watch the short film and take something in.”
Over seven people were involved in the making of the film which tells a fictional story.
The film was funded by Mediabox – a London-based organization that gives financial backing to youngsters to produce creative media projects.
Anup is now hoping to include ‘Red Street’ in a number of film festivals across the capital over the coming months.