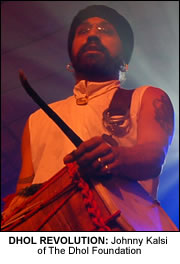 THEY are the biggest pioneers of the Dhol, and this month Johnny Kalsi and Co of the Dhol Foundation release their latest album ‘Drums & Roses’. We spoke to Johnny to find out how the album came about and why the Dhol Beat is so popular amongst non-Asian audiences.
Tell us a bit about the albums musical vibe
The Musical vibe of this album is a journey from a point in my life that I almost felt I shouldn’t speak about and indeed I never did. I just let the music do all the talking and let people make their own minds up about what possible lessons I had to go through and indeed feelings through the whole experience and out the other side. It could be about anything you want to make of it on a personal level. From loosing a loved one (like relative passed away) to loosing a loved one (like someone you were in love with). Interestingly they both seem to hold very strange and dark emotions that equal almost the same sadness to a certain degree. There could also be an element of anger or even despair. But the rejoice is the fact that you come out of it and through the whole time you feel it’s a never ending tunnel but it’s true what they say, time is the healer.
How did the album come about?
After the second album, Drum-believable, we had a couple of ideas that were over hanging off the back of that so it was a case of implementing those ideas getting into a studio again and getting the ideas down to solid tracks. I have a fabulous band that really has a true band vibe about it. So the Dhol players are on a carrousel and in the pool of drummers we select the touring drummers for what ever gig. Dips, Yash & Jas D have been the longest running members of the touring party for TDF. It would be nice to see more of them at the classes but they were there while we were growing. Francis Hylton plays Bass and is also an active member of the Jazz-Funk band “Incognito”. Ian Markin & Stuart Roberts on Drums sometimes we also have Andy Gangadeen as well. Sunil Kalyan & Mital Purohit on Tabla. Gavin Lomboss on Guitar & Bill Mathew on front of house sound. Martin Dudley is our Lighting Director. We are all one big happy family. No-one is higher than another in the band. There once came a time where I did have people in the band that considered themselves higher calibre of musicians, so I sacked them!
Great name for the album – ‘Drums & Roses’. How did you come up with the name?
LOL It was actually Jaz my lovely lady wife that came up with the name while I was playing her a track in progress. I thought it was cheesy to begin with but then I thought it was quite a good title for the track we were listening to. As the tracks came together it was the better choice from the titles we had. We like to keep the theme of Drum or Drums in all our titles as it gives new comers a fair chance at guessing what the cement consists of for our tracks. During the production of our first album “Big Drum Small World” many record companies didn’t get what the music was about and couldn’t see or hear the relevance. Personally I think our music was to advanced for it’s time. Sometimes I hear the tracks on World Music radio and think wow that’s a nice track not realising it’s one of mine. Funny I thought that would only happen after about ten albums. 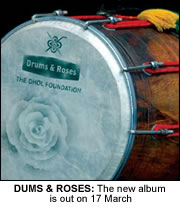 You featured alongside the Kaiser Chiefs at the Electric Proms last December. How did that collaboration come about?
A few years ago 1996 to be sure, I met with a very nice man called David Arnold. He had just produced a track for Natacha Atlas called “One Sweet Moment”. I was featured in the track and the video. Ever since then I kept in touch with him and he always gives us big showcases to fill. One of which was the Brit Awards 3 years ago. We played with Natasha Beddingfield and her brother Daniel. 20 Drummers went wild on stage half way through. It was great. David was then commissioned by the Chiefs to orchestrate the score for a Kaiser Chief set. One of the tracks called “The Angry Mob” the asked for 4 Dhol players to join them again, in the middle of the set. I joined the guys 1 hour before the show time. I had just arrived from Goa and ran for a cab to get me to Camden in time for the filming. Rock & Roll!
It’s so great to see something so ethnic like the Dhol have this mass appeal. Why do you think it’s become so popular among non-Asian audiences?
I think to be honest, people like Peter Gabriel actually exposed much of the Indian & African music into World Music Listeners. When the Dhol became exposed properly, the appeal shot up as did the demand to hear it, learn it, play it & perform it. With that I am glad that The Dhol Foundation were the first on the World Music Circuit to exposing the Dhol to these audiences. They know us like a brand name to WOMAD. So much so that even non-Asians want to learn our indigenous drum.
What have Dhol Foundation got lined up for the rest of the year?
The Dhol Foundation are being spread quite thin across UK & European festivals. They will appear at Wychwood Festival, WOMAD, Festival of World Cultures in Ireland & Italy. I am taking on a tour in a new venture called Firewater. Seem to be radical sort of Trans Global vibe and it’s a European & US Tour. Should be fun but have to make sure I cover all the Imagined Village gigs also. My Priorities will always lay with Dhol Foundation and wait for the day we do a European & US Tour.
‘Drums and Roses is out on 17 March and is available to buy through itunes.com and Amazon.com
Related Links
WIN a copy of ‘Drums & Roses’