Q: I keep feeling dizzy when I stand up. What’s causing it?
Dizziness can be a symptom of many different conditions. People may feel dizzy if their balance is affected, or sometimes it can be a symptom of something more serious. Feeling dizzy is a fairly common sensation for most people at some point during their lives and is not necessarily cause for concern.
Our sense of balance is affected by a number of factors, including vision, senses in our feet and the balance organs in the inner ear. The most common causes of dizziness are viral infections, which can inflame the inner ear and ear canals.
In extreme cases, colds and flu can lead to more serious infections, such as labyrinthitis, which leaves the sufferer feeling as if the room is rotating around them. Fortunately the symptoms of labyrinthitis usually disappear within a few days or weeks.
Severe dizziness can also be a symptom of Menieres disease, which causes vomiting and temporary hearing loss. Attacks may last for only a few hours or day.
Dizziness can also be caused by low blood pressure (hypotension). This may mean than not enough blood is supplied to the brain, resulting in a dizzy feeling. This may be accompanied by other symptoms, such as blurred vision and palpitations.
Dizziness caused by a change in your body’s position – such as standing up after a long period of lying or sitting down – is known as postural hypotension. It becomes more common with ageing and also with diabetes, although the sensation shouldn’t last longer than a minute or so. If it goes on for longer than this you should see your GP to check that there aren’t other underlying causes.
Some people can also experience dizziness after eating – known as postprandial hypotension. This is also more common in people with diabetes. As blood is diverted to the stomach after eating, blood vessels in the rest of the body usually constrict to maintain the right level of blood pressure throughout the body. If the heart doesn’t work hard enough to maintain blood pressure levels throughout the body, the sufferer will feel dizzy. Eating smaller portions or lying down after a meal can help to alleviate the symptoms.
If your dizziness continues, you should visit your GP to ensure that it isn’t a symptom of a more serious condition. 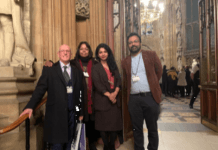