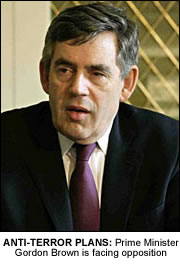 PRIME Minister Gordon Brown is facing increased opposition to plans for extending the 28 day limit for holding terror suspects without charge.
The Government are hoping to extend the limit to 58-days but critics, including a number within the Labour Party, have criticised the plans saying there is not enough evidence to support the extension.
Prime Minister Gordon Brown declared on Wednesday in his statement on fresh anti-terror measures that he believed a cross-party consensus could be found on the issue.
But his task was made much harder when it appeared his Security Minister Admiral Lord West of Spithead did not share the same views on the 28 day limit extension.
Lord West told the BBC Radio 4 Today programme: “I want to be totally convinced because I am not going to go and push for something that actually affects the liberty of the individual unless there is a real necessity for it. I still need to be fully convinced that we absolutely need more than 28 days.”
But barely an hour later, after a meeting with Mr Brown and Home Secretary Jacqui Smith in Downing Street, he emerged from No 10 to tell reporters: “My feeling is, yes, we need more than 28 days.”
Shadow Home Secretary, David Davis, said the Government’s security agenda was “in chaos” after Lord West’s apparent U-turn.
He said: “There is no evidence whatsoever to support an extension beyond 28 days as it stands. The fact that the Security Minister changed his mind on this within 60 minutes yesterday, after a meeting with the Prime Minister shows this is motivated by politics, not national security. The Government’s security agenda is in chaos.
“If you need special measures, you declare a temporary state of emergency. The Government already has this power. It’s called the Civil Contingencies Act, which they created. But what the Government is looking for is an undeclared, permanent state of emergency.”
In other anti-terror measures announced by the Prime Minister, travellers are set to face an increase in fare prices in order to fund a new system that will screen every passenger travelling in and out of the country.
As many as 53 pieces of information can be taken from a single traveller if they plan on leaving, or entering the country.
The information, taken when a ticket is bought, will be shared among police, customs, immigration and the security services for at least 24 hours before a journey is due to take place.
The “e-borders” system will be used to check on flight and train passengers in the country.
Mr Brown said it was important to increase security measures at stations, airports and ports.