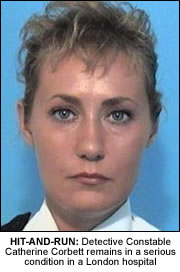 A MAN has appeared in court charged in connection with the hit- and-run of a West Midlands policewoman.
Detective Constable Catherine Corbett was knocked down as she tried to arrest a fraud suspect near Heathrow Airport last Friday.
41-year-old Rashpal Singh of Gladstone Street, West Bromwich, was charged with causing grievous bodily harm with intent, two counts of actual bodily harm against two male officers and dangerous driving during his three-minute hearing at Hendon Magistrates Court in north-west London.
Det Con Corbett remains in a critical condition in the neurological unit in London’s Charing Cross Hospital. She suffered serious head injuries
Two other male officers sustained minor injuries in the collision.
A 32-year-old woman arrested in connection with the incident has been released on police bail.