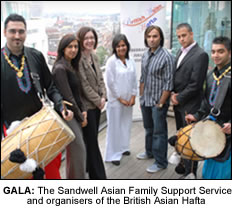 A MIDLAND charity is in joyous mood this month after being chosen to take part in a special week long celebration into the achievements of the British Asian community.
Smethwick-based Sandwell Asian Family Support Service (SAFSS) has been chosen by organisers of the ‘British Asian Hafta’ which will celebrate the contributions made by British Asian’s in a week long event at the end of October.
SAFSS, which supports South Asian children, young people and young adults with disabilities, has been recognised for its work on numerous occasions.
Chief Executive Parpinder K Dhatt described the group’s involvement with British Asian Hafta as a “privilege”.
“As the chosen charity for British Asian Hafta Sandwell Asian Family Support Service will highlight the achievements and contributions made by British Asians with disabilities”, she said.

”SAFSS is the only charity exclusively working with and representing Asian children, young people and adults with disabilities in the West Midlands and by being part of the Hafta, all members of the community are involved.

”It is a privilege for us to be chosen as the named charity and an excellent platform for SAFSS to highlight the needs of South Asian children and young people with disabilities. We thank the organisers for choosing SAFSS.”
The recognition by British Asian Hafta follows a very successful six months for the charity. SAFSS received an ‘Outstanding’ in its After School Club Ofsted inspection in August and received a ‘Good’ from the Commission for Social Care Inspectorate (CSCI) following its inspection of its domiciliary care service.
In September SAFSS won “Out of School Club 2007” awarded by the Early Years and Childcare Unit of Sandwell Metropolitan Borough Council for “outstanding practice and examples of creativity for its work with South Asian children and young people with disabilities.”
SAFSS recently celebrated its 21st anniversary with a star-studded event and raised over £4,500 for activities for children and adults with disabilities.

British Asian Hafta (Week) will celebrate the contributions made by British Asians to the UK during a week long gala between October 27th and November 9th.


The celebrations start with the British Asian Hafta Awards Dinner 2007 on Sunday 28th October at the International Convention Centre and the awards will include the performance of an exclusive track written by Taz of Asian band Stereo Nation, and many other artistes.