Home Interviews Getting ready for Anusha 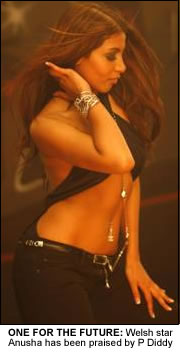 She has been described by none other than P Diddy as ‘one to watch’, and Cardiff born Anusha is definitely living up to the hype.
Hotly tipped by the Bad Boy guru and able to count Ne-yo among her US fans, Welsh girl Anusha is ready to bring both the British and American R&B scenes to their knees with the release of her debut single ‘Are You Ready’ .
The track is a catchy R&B anthem, with hints of hype Ciara and Beyonce. But with a fresh British style brought to the mix by producer Chris ‘Rockizm’ Patrick – the mastermind behind iPod-essential DMX and Jamie Foxx remixes – Anusha proves she has what it takes to cut it in the Asian music scene.
We caught up with the starlet to get the lowdown on Asian music’s new star…
For those who aren’t familiar with you, tell us a bit about yourself
I’m just your average 23year British-Asian girl, originally from Cardiff but now living in London. Oh yeah and I love to sing and perform!
You have a degree in Politics, what made you want to go down the music path?
I have always had an interest in politics but my passion lies with music. I had to follow my heart and pursue a career doing something that I love.
Where does your musical inspiration come from?
I absolutely love Tina Turner, Janet Jackson, Beyonce- they have both been such huge inspirations because their performances are enchanting and well as entertaining. Also Tina Turner’s life story is amazing. She was in a very abusive relationship and she managed to break free and flourished.
Your single, ‘Are you Ready’ is out now; tell us a bit about the song
I would love to say the song was about something deep and meaningful but it’s simply a fun, club track which is based upon lust, desire and sexual encounters. I love the beat.
You also have an album coming out soon, how do you think music fans will take to the album?
It’s a good album- it has a great beats, great lyrics and nice vocals. It also covers a wide range of experiences and moods. I like to describe it as a soundtrack to the rollercoaster of emotions in life.
R&B maestro P Diddy put you up as his ‘One to Watch’ on Myspace. What was your reaction to that?
I was very excited and flattered that a huge superstar mogul like him would even notice me. It also gave me a lot of confidence and encouragement to stick at trying to make it in the music industry. Sometimes set backs can be really disappointing but after his compliments, I honestly believe that if you work hard, the possibilities are endless. My favourite quote is ‘you are never given a dream, without the power to make it come true.’
Many singers use their songs to sing about personal/life experiences. Do you draw on your history/culture in your songs?
I use a lot of my life experience as a young Asian female in my writing, but I write about a range of topics from political issues to shopping.  I think that as an artist, it is important not to place boundaries upon yourself, or your writing.
Finally, what have you got lined up for the rest of 2007?
Well I’m going to be travelling around Britain, busting my best dance moves whilst touring the clubs. I love meeting and introducing my music to new crowds- I get a great natural high from it! I am also in talks to star in a new British Asian Film at the end of this year, it is a little risky, but that’s not going to stop me!  (You know how the saying goes ‘he who dares…..wins’) I’m little worried about what my father might say though! Oh yeah, how could I forget? Once a month I am going to host my own Radio Show on DESIHITS which is just fabulous because I love to chat and always have so much to say and not enough people to listen. The show is going to be a scream- I can’t wait.
For more information on Anusha or to listen to her music log onto www.myspace.com/anushamusic