Home Contributors Not really cricket but it was fun

The Cricketer with Mansoor Ahmed 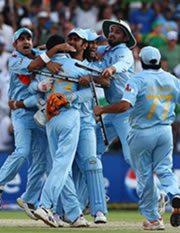 PAKISTAN AND India contributed heavily in an exciting couple of weeks of cricket circus in South Africa.
By far the best games of the tournament were played amongst these two teams, first being a tie and India narrowly edging Pakistan in the final.

Some people, including my wife thought that competition was a good spectacle. However, I can’t wait to get back to normal‚ cricket. I guess I am a traditionalist.
It was fast and furious and good fun for non-regular watchers but there is little skill involved. I don’t want to see batsmen slogging aimlessly and edges and miscues flying to the boundary. Despite all this, India were worthy winners having beaten almost all of the top teams on their way.

By the time you read this column, we should be back to more familiar form of cricket with India hosting Australia and Pakistan to play South Africa.
It will be interesting to see how Pakistan cope without Inzamam for first time in nearly 15 years. Misbah ul Haq is almost certain to play but the real challenge will be for the openers, who have failed repeatedly over the past couple of years. Taufeeq Umar has a fantastic test record and looks set to return but will he cement his place?
Only time will tell. With the exception of Mohammed Yousuf, batting looks very fragile as almost everyone tries to establish themselves.


However, Shaun Pollock’s shocking omission from first test a week before the series is due to start will benefit Pakistan and back fire on South African in my opinion. He has a terrific record in the sub-continent and mental hold on Pak batsmen.

On a separate note, I wonder how many of you tuned into Geo’s coverage of the Twenty20 World cup. Those who did would have been pleasantly surprised by not only Urdu commentary but also a female commentator. A lady by the name of Meryam put many male commentators to shame with her understanding of the game and choice of words. Well done Geo!