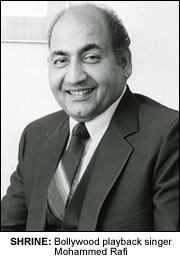 THOUSANDS of visitors from across the world are expected to descend on Birmingham’s Festival of Xtreme Building next weekend as a tribute shrine to the late Bollywood legend Mohammed Rafi is unveiled in an attempt to make him a Saint.
The contemporary shrine, which will marry forms of sacred geometry with high-tech materials and electronics, will be on show at the free event next Saturday which is open to all.
The CBSO, Bollywood singer Shin, the Dhol blasters, Gurcharan Mall and Bollywood dancers Hina & Co will also perform throughout the day.
Members of the public are being encouraged to bring offerings to be placed at the shrine and if enough offerings are placed, Rafi will attain the status of Sainthood.

Birmingham artist Tasawar Bashir, who designed the relic said: “There is no doubt in my mind that Mr Rafi is already a Saint. However, life moves at a much faster pace in the 21st century and therefore I believe that achieving the status of Sainthood should reflect this societal shift.

“I asked myself how I could pay homage and honour Rafi, and was struck by the simple solution to make a shrine; a capsule in the middle of a bustling city which compresses time and space and expresses a one-to-one transmission between Mr Rafi’s voice and the listener. It is my intention that the shrine will transcend time and space.”

Traditionally a piece of the Saint’s body or a personal item must be placed within a shrine; in this case it will be a voice.  Mohammed Rafi’s music will play continuously inside the space.

The shrine has been built from transparent materials to emphasise its accessibility, and to encourage people who may not be familiar with Islamic art, or indeed Mr Rafi, to explore the space.


Tasawar added: “The shrine will be affected by the environment, weather, and light depending on the time of day, meaning that every visit will be unique.”

Mohammed Rafi is regarded as the greatest ever Hindi male playback singer in Indian cinema.  He provided the vocals for Bollywood actors to mime to, rising from humble beginnings to achieve unprecedented success. In a career that spanned over 40 years, Rafi sang over 26,000 songs in the national languages of India, and achieved success across many genres of Asian music.

His songs are associated with the golden age of Bollywood, and the genuine affection and love from millions of fans is thought to be as strong today as in 1980 when millions of people took to the streets for his funeral.

Dave Pollard, Curator of the Festival of Xtreme Building, said: “Mohammed Rafi had near universal appeal and his songs covered both the sacred and the secular. We hope that the shrine will create a link between the city and communities which may not normally visit the town centre, and urge the public to assist Tasawar in his attempt to turn this respected man into the peoples’ Saint.”

The shrine is a ‘Project 500’ commission, a challenge set by the Festival of Xtreme Building asking artists and architects to work within a community to build a structure or installation with a budget of only £500. The shrine has been constructed with the help from community residents and the support of Travel West Midlands, SAMPAD and Marketing Birmingham.