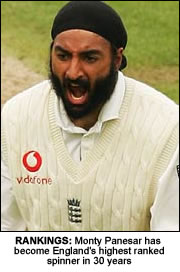 ENGLAND spinner Monty Panesar has burst his way into the world’s top ten bowlers after a scincilating performance against the West Indies.
The 25-year-old Northamptonshire left-arm spinner claimed 23 wickets in England’s series win over the West Indies at an average of 18.69.
His six-wicket haul in the fourth and final Test at Chester-le-Street helped catapult him six places in the LG International Cricket Council’s ratings.
He is now joint sixth with England team-mate Matthew Hoggard on 721 and has become the highest England spinner since Derek Underwood in 1977.
Panesar could realistically move up the rankings if he continues his form against India who travel here for a Test and One-Day international series later this summer.
He welcomed his move up the rankings saying he has been “pleased” with his performances.
“It’s been an unbelievable series to get 23 wickets in the four Test matches and I feel very lucky with the way things have gone,” said Panesar.
“I am very pleased with my performances.”

Restaurants join forces for ‘Save the Bengal Tiger’ campaign

There won’t be any additional VBS, you can forget outreach, in reach, appointed worship occasions, etc

All Internet Dating Sites & Apps. Under was a complete list of best wishes...

your allowance and completely chosen a ets.from inside the real world,most someone end far...