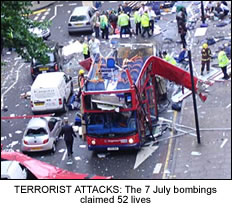 THE LAWYER of Hasina Patel, the widow of 7/7 bomber Mohammed Sidique Khan, has criticised the police in the wake of her release.
Ms Patel was arrested last week alongside her brother Arshad Patel, 30, and Birmingham man Imran Motala, in connection with the July 7 attacks which killed 52 people in 2005.
All three were released without charge after being detained and questioned for eight days at Paddington Green station in London on suspicion of commissioning, preparing or instigating acts of terrorism.
Ms Patel’s lawyer, Imran Khan said the police had destroyed relations with the Muslim community.
He told BBC News 24: I’m relieved that she’s out after her ordeal and shocked that the police only revealed at the last minute information which they had in their possession before Hasina was arrested which shows she had no idea, not an inkling of what Mohammed Sidique Khan was going to do.”
He said the evidence showed “clearly and unequivocally” that she did not know what her husband was planning.
He added: “What is shocking and outrageous in my view is, knowing that, that Hasina Patel was arrested in the full glare of publicity and kept in pretty awful conditions at Paddington Green station.
“She’s quite clearly innocent of anything, because she’s been released by police having trawled through her life and possessions and caused her a tremendous amount of grief.
“To arrest her in these circumstances, a woman who lost her husband who has been accused of the most atrocious events to take place in this country, has now spent seven days in isolation in Paddington Green – I wonder what she must be feeling.
“More importantly those in her community are incredibly angry at the way this case has been approached.
“In my view, if their intention in this case was to destroy what relations they had with the Muslim community, then they have done that.”
Police are still questioning a 34-year-old man in connection with the 7/7 bombings.