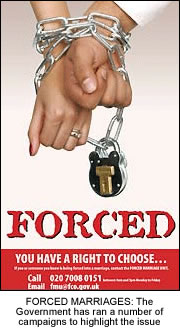 SURVIVORS of forced marriages are being offered help to start a new life with the launch of a new support network and handbook.
A new handbook for survivors was launched by the government today, which offers practical help and information to help survivors take control of their lives.
A survivors’ network is also being launched in partnership with Karma Nirvana, a forced marriage NGO, which will provide long term emotional support.
The important work of the Government’s Forced Marriage Unit (FMU) was made clear today after Home Office Minister Baroness Scotland revealed they had recently rescued an 11-year-old girl from a forced marriage in Bangladesh.
Speaking to the BBC Asian Network she revealed the FMU were alerted to the youngsters case following a call from her aunt.
“We’ve just rescued an 11-year-old who’d been forced into marriage, who’d been raped”, she said.
“Since she was six she’d been looking after her disabled mother and two siblings. And with the help of her aunt we were able to rescue her and bring her back.”
The Government’s forced marriage unit deals with around 5,000 inquiries and helps rescue up to 300 women, children and men who are trapped in abusive, forced marriages every year.
Baroness Scotland said there was “no honour in a marriage based on force and hostility”.
“Forced marriage is terrible for those women, children and men who find themselves in an often violent and abusive situation against their will”, she said.
“It’s something that should not be happening in the modern world – it’s not a respected cultural or religious tradition. Neither does it have anything to do with honour – there can be no honour in a marriage based on force and hostility.
“The Government is determined to help the victims of forced marriage and the handbook and network announced today are important steps in making sure survivors get the help they need and deserve to lead a new life.”
Department for Constitutional Affairs Minister Cathy Ashton added: “Forced marriage cannot be tolerated and the UK Government is committed to developing a range of measures to prevent it. As part of this commitment I am looking forward to providing support for Lord Lester’s amended Forced Marriage Bill on Thursday. Along with the handbook and network launched today the Bill would provide a strong set of additional tools for those trying to prevent forced marriages and protect victims of them.”