Last month we brought you the first part of our special feature on British Asian women in football. We spoke to photographer Jaskirt Dhaliwal who revealed what led her to the football lens and why she believed generational attitudes within her community were changing towards the inclusion of British Asian women in football.
In Part 2 of our feature we talk to two British Asian players, Aisha Ahmad and Ayesha Abdeen who both represented Britain in Iran’s 2005 Women’s Islamic Games for the British Muslim Women’s Futsal team. 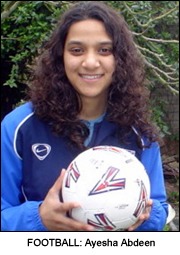 PART 2
Ayesha Abdeen, football player for the British Muslim Women’s Futsal team and Vice Chairperson of the Muslim Women’s Sport Foundation.
“Together with my team mates, present & future, we will develop the greatest British Muslim Women’s Futsal team ever to compete in the Women’s Islamic Games”
For Ayesha Abdeen, football is in her blood. From an early age when she attended a football academy in Richmond, south-west London she has always wanted to make it to the top of the beautiful game. Playing for the British Muslim Women’s Futsal team gave her that opportunity and she’s never looked back. She admits she wants to ‘develop the greatest British Muslim Women’s Futsal team ever to compete in the Women’s Islamic Games’ and her passion shouldn’t be underestimated.
Speaking to the Asian Today she reveals how the team fell perfectly into her love for the game and her religion.
How did you get involved in the team?
I got involved in the team after hearing of the Futsal team that competed at the 2001 Islamic Games. I had just finished college where I spent two years training at a women’s football academy and was at a stage where I was contemplating on how I was going to continue playing football whilst also trying to learn and focus more on my      religion. Luckily for me this team popped up.
What reaction do you get when you mention you’re a member of the team?
In my community most people know me as the sporty one and when they found out I represented Britain they are genuinely interested to know more about the team and what it was like to compete at an international sporting event. For some though, mainly young men, when they come to know I represented Britain, they are quite impressed at first, but when they hear it was a Muslim team or an Islamic Women’s Games they back track slightly. Obviously for them it’s not as impressive as competing at the Olympics or playing for the England team, but what they don’t realise is that the level of competition at the Islamic Games can be compared to the Olympics.
What does it mean to you to play for your country?
Playing for Great Britain gives me immense pride and playing for the British Muslim women’s team is an added bonus. I not only get to represent my multicultural nation but also my religion which in turn means I am truly representing who I am – a British Muslim woman, and it can’t get any better than that. It couldn’t be a more natural role.
Women’s football is still miles behind in comparison to men’s football in the UK. In what ways can the profile of the women’s game be enhanced?
Women’s football is the fastest growing sport in the UK. For its profile to be enhanced we need to see success on an international stage, which I think is not too far away. We’ve already seen the development and level of players such as Kelly Smith, Rachel Yankey etc, and with time there’s no doubt many more players as skilful as them will come about and enhance the game further. In terms of enhancing the profile of football for Muslim women, there is a much bigger challenge. Luckily we now know the path to follow – Futsal. Futsal is a game that brought the world the likes of Ronaldo, Ronaldhino, Roberto Carlos and it is the perfect game to get Muslim women into football. As an indoor sport, Muslim women can play comfortably without compromising their Islamic beliefs, they can develop their game in a way like no other and above it all, unlike with the 11-a-side game they can compete. Futsal is unknown to the vast majority in the UK, however, throughout the rest of the world it can boast being bigger than 11-a-side.
What are your future plans as part of the British Women’s Football team?
My plans for the future would be to train hard and prepare for the next International Women’s Islamic Games in 2009. No-one’s place is safe on the team yet. Inshaallah together with my team mates, present & future, and we will develop the greatest British Muslim Women’s Futsal team ever to compete.
Related Articles:
Interview: Aisha Ahmad
Interview: Jaskirt Dhaliwal
In Part 3 of British Asian Women in Football…
We speak to Rimla Akhtar, the woman behind the Muslim Women’s Sports Foundation
Coming soon on www.theasiantoday.com  and available in the May issue of The Asian Today