Home News ‘We may never know his reasons for brutal murder’ 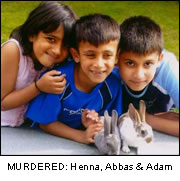 THE DETECTIVE who led the investigation that convicted a taxi driver for the brutal murder of his wife and three children admitted the reasons for the horrendous crime may never be known.
Detective Supt Martin Bottomley spoke just moments after Rahan Arshad was jailed for life for battering his wife, Uzma Rahan, and three children, Adam, 11, Abbas, eight, and Henna, six, to death with a rounders bat at the couple’s home in Manchester last summer.
Arshad, who had denied four counts of murder, will spend the rest of his life in prison after a jury at Manchester Crown Court did not believe his story that his wife had killed the couple’s three children.
Detective Supt Bottomley said the case was one of the “worst” his officers had ever dealt with.
“None of the officers have ever come across a case like this. It was a really gruesome scene – a scene they will never forget”, he said.
“It has been probably the most serious investigation of my career so far. My officers have been deeply affected. We will probably never know why Arshad committed this awful crime unless he chooses to tell us.
“We will also never be able to tell for definite what happened that evening, we can only speculate”, he added.

“Uzma’s family have been left absolutely devastated. They had been keen for Uzma and Rahan to reconcile but their reconciliation later led to the deaths. No one could have ever anticipated such a brutal end.
“I hope knowing Arshad has been brought to justice will bring some comfort to the family, although nothing will bring their Uzma and her beautiful children back.”
Sentencing Arshad, Mr Justice David Clarke said in his case life “meant life”.
“You killed your entire family in circumstances of great brutality,” said Mr Justice Clarke.
“You beat your wife to death in her bedroom and then coldly and deliberately you brought your sleepy children downstairs to meet their deaths.
“There is no suggestion of mental illness on your part. Life imprisonment in your case means life.”
The trial at Manchester Crown Court heard how the couple were going through difficulties in the marriage and had been urged by their own families to give their relationship another go.
Arshad was infuriated that his wife, who was from Lahore, had started wearing western clothes and suspected her of having an affair.
When she went back to Pakistan to mourn the death of her mother, Arshad sold the family home in Burnage, flew to Pakistan with the couple’s children, left them there, filed fake divorce papers and went travelling with the proceeds of the house.
When he returned the couple were urged to give the marriage another go and they moved to their new home in Turves Road, Manchester, where Uzma and her children would meet their deaths.
On July 28 2006, Arshad took his family to Blackpool for the day where he told them they would be travelling to Dubai in the following days for a holiday. It was a lie. Unbeknown to Uzma, her husband had already planned their violent deaths. There were no flights booked to Dubai – just one flight for Arshad to Thailand where he was eventually tracked down after the gruesome discovery of his family. 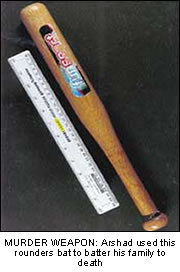 Later that evening the couple rowed and Arshad attacked his wife with a rounders bat thought to have been brought by him on the trip to Blackpool earlier in the day.
She suffered 23 injuries to her head and there was evidence of a violent struggle.
Arshad then turned his attention to his three sleeping children. He carried his eight-year-old son Abbas downstairs where he beat the child’s head until he was dead.
After covering the body he brought his only daughter Henna downstairs where he beat her to death before covering her body with a duvet.
Finally he carried his eldest child, 11-year-old Adam, downstairs, beat him to death and put him next to his other children.
After cleaning the rounders bat and hiding it in the shed, he washed blood splatters off himself before packing a bag and fleeing to Thailand.
It was not until almost a month later that the badly decomposed bodies of Uzma and her three children were discovered after a neighbour raised the alarm.
By this time Arshad was enjoying life in Thailand where he had visited the resort of Phuket, Malaysia and Kuala Lumpur.
It was when he tried to cross the border back into Thailand when he was stopped by officials.
On his return to the UK he told officers: : “I confess to the murder.” In the police station he added: “My beautiful kids. I don’t regret killing that f****** bitch but my kids. Killing my kids.”
But this was last time they would hear a confession. He refused to answer police questions claiming his wife had killed the couple’s children. 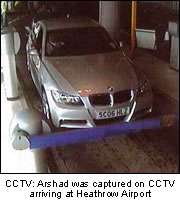 A statement read out on behalf of Uzma’s family after the trial said: “No one can heal the grief we have suffered. Uzma was my best friend, our beloved sister and beautiful daughter.
“My mother can’t understand how he could destroy them.
“This should be a peaceful time for my mum but instead she’s been forced to suffer an unthinkable ordeal.
“I am glad this man will never get out of prison. The judge made a brilliant decision. A person like this should never be freed.”